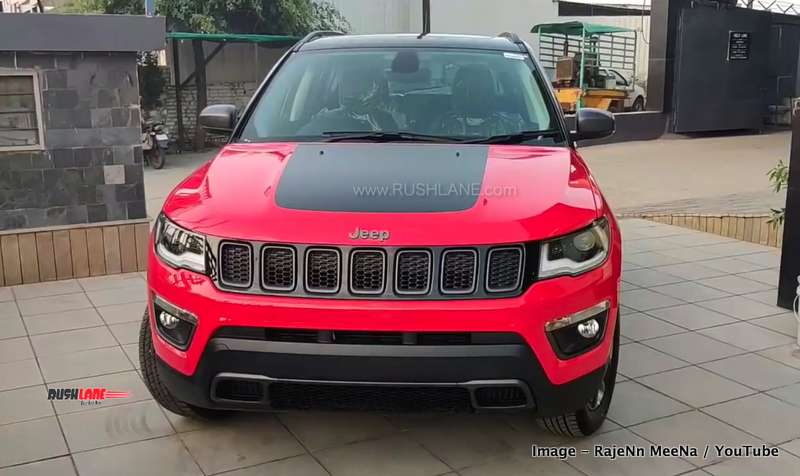 Since its launch, the Jeep Compass has built its own fan-base. However, one variant which most SUV enthusiasts have been waiting for happens to be the Compass Trailhawk. And it is this variant, which has now been officially revealed. Dealerships are now accepting bookings, as well as offering test drive slots.

The Trailhawk variant is known for its off-roading capability and its distinctive look. However the model coming to the Indian shores will miss out on the signature red tow hooks which are available on the front. This is due to the upcoming safety norms in India which also take into account pedestrian protection. The rules want the cars to have smooth front ends, so that in case there is a collision with a pedestrian, there is minimal effect on the individual.

The Trailhawk is sold in similar configuration in some other countries like UK. In case, you want to get the hooks as an accessory, even that won’t be feasible as they won’t be sold, at least not at the official outlets. However, the single hook on the rear-end will come along as standard fitment. Watch the video you RajeNn MeeNa below.

Talking about the Trailhawk, it will come equipped with a four-wheel drive configuration along with low range. It will also have an additional ‘Rock’ mode, over and above the other modes available in regular Compass. Transmission duties will be taken care off by a 9-speed automatic box, something which the Compass was lacking (no diesel AT option available currently). This will make the only Compass diesel variant with AT option.

On the outside, the Trailhawk looks fairly distinctive from the regular Compass. It gets dual-tone alloys and modified bumpers (which help in improved departure (33.6 degree) and approach (30 degree) angles). Also, it has an increased ground clearance (compared to the regular Compass) to help it tackle all kinds of obstacles it might come across while gallivanting around in the wild.

As the Trailhawk itself comes with multiple off-roading specific features, Jeep will mostly remove some creature comfort features to keep the overall price in check. Some features which customers will miss out, when compared to the top of the line 4×4 Compass Limited are: auto wipers, auto headlamps and powered driver’s seat. Pricing is expected to be in the Rs 25-27 lakh range while competition will include vehicles like Hyundai Tuscon, MG Hector and Honda CR-V.