For Jeep India, Compass has proven its mettle, and beyond. As FCA sets sights across global markets, plans for include a Jeep India sub 4m SUV, followed by a three row mid-size SUV that will be introduced in the CY 2020.

The Jeep India sub 4m SUV will take on Maruti Suzuki Vitara Brezza, Ford EcoSport, and Tata Nexon. The announcements were made as part of FCA Capital Markets Day that outlined FCA’s five-year plans till 2022. Market drivers for India point to more stringent safety and emission norms coming into effect. As the sub 4m continues to grow and dominate, SUV growth will outpace the industry, a trend which is already pointing the direction of the auto industry.

It’s no surprise then Jeep India would want to have a vehicle in a segment that’s been projecting well since a few years now. The sub 4-metre SUV offers an excellent value proposition for manufacturers in India owing to such cars being taxed the same as small cars.

It’s no surprise that the Jeep product portfolio in India is limited but the success of Compass has already helped the company make inroads in terms of network development. In fact, IHS projections point to regional UV growth from .8 mn (2017) to 1.6 mn (2022). keeping in mind growth projections, the company will expand it sales and service network. 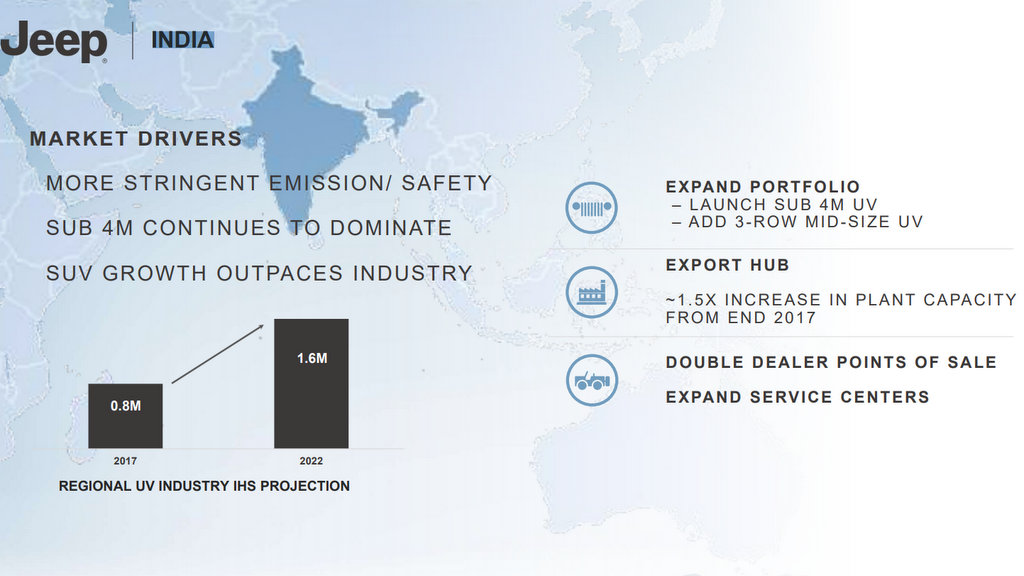 In developing the region as an export hub, plant production capacity is being increased 1.5x since 2017 end. That would take production numbers to 2,40,000 units, from 1,60,000 units. The Ranjangaon plant in India on the outskirts of Pune is a JV unit between FCA and Tata Motors.