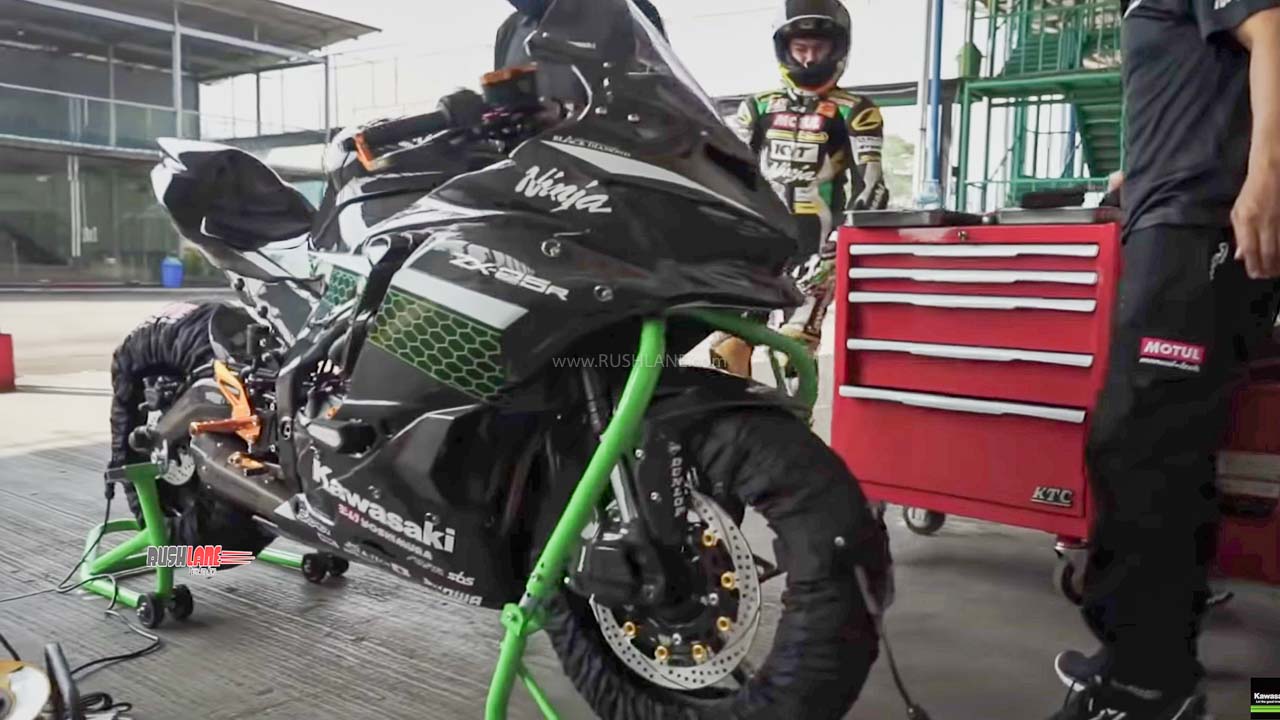 Launched in Indonesia earlier this month in July, Kawasaki Ninja ZX-25R has generated significant buzz among biking enthusiasts. While the looks are definitely something to rave about, Ninja ZX-25R’s primary attraction is its 4 cylinder 250cc engine. In a video uploaded by ‘Kawasaki Indonesia’, we see the true potential of Ninja ZX-25R unleashed on the race track.

This is a carbon custom unit designed to further improve the bike’s performance. As seen in the video, the custom bike is able to achieve top speed of 190 kmph. The body comprises carbon composite materials and it has been created by A-Tech Japan. Other customizations include Yoshimura Hepta-Force TSS exhaust, TK chain & sprocket, Sunstar disc brake and Dunlop tyres. Some parts have also been provided by Sniper Japan.

Although it’s a quarter litre motorcycle, Ninja ZX-25R generates 50 hp of max power at a staggering 15,500 rpm. Its max rev rate is even higher at 17,000 rpm. That’s some serious power coming from a 249cc, liquid-cooled, inline-four engine. By increasing the ram air intake, the power output can be further boosted to 51 hp. Ninja ZX-25R power output is not only above its quarter litre rivals, but also beats some higher capacity motorcycles. For example, KTM RC 390 makes 43.5 hp whereas Yamaha R3 churns out 42 hp. Watch Andi take the Kawasaki Ninja ZX-25R Carbon around the Sentul Circuit in video below.

Even one of its bigger siblings, the twin-cylinder Ninja 400 generates 49 hp. However, torque output of Ninja ZX-25R is comparable to other bikes in its class. Peak torque output is rated at 22.9 Nm at 14,500 rpm.

With a kerb weight of 182 kg (ABS model), the bike is also heavier than several same class and some above class motorcycles. For example, twin-cylinder Honda CBR250RR weighs only 168 kg. Ninja 400 is also lighter than Ninja ZX-25R. Suspension duties are performed by 37mm Showa front forks and Kawasaki’s back-link rear suspension. Braking system comprises 310 mm and 220 mm disc at front and rear respectively.

In Indonesia, the bike has been launched in two variants, a Standard Edition and a Special Edition. The latter is offered with features such as riding modes, traction control, dual-channel ABS and bi-directional quickshifter. While the standard variant is offered in only metallic spark black, special edition colour options include Spark Black/Pearl White, Candy Plasma Blue/Metallic Spark Blue and Lime Green/Ebony Metallic.

Bike enthusiasts in India would certainly like to ride Ninja ZX-25R, but its launch in the country is still uncertain. With its range of equipment, the Ninja ZX-25R may come with a high price tag. While it costs approximately Rs 5 – 5.88 lakh in Indonesia, Ninja ZX-25R price in India could be in the range of Rs 6.5 lakh to Rs 7 lakh.