With the start of the new FY, a number of manufacturers announced price hikes. This included Kawasaki India. The brand announced a price hike of upto 7 percent varying, depending on bike. At the time, the company website didn’t list the Kawasaki Z250.

Q1 FY2019-20 is almost done with, and the company still hasn’t amended the exclusion. With that, the listing may be gone for good. It’s no surprise though. While Kawasaki Z250 did enjoy its popularity as an entry level bike, launch of Ninja 300 ABS worked wonders for the brand in the segment. Ninja 300, a full faired bike costs lesser and has a higher power output.

A month earlier, the company announced that Ninja 300 sales had touched the 1,000-unit milestone in under a year of launch of its India-made bike, which also features ABS. With Ninja 300 ABS donning its bestseller hat, there’s little that can be done to turnaround Kawasaki Z250’s fortunes. 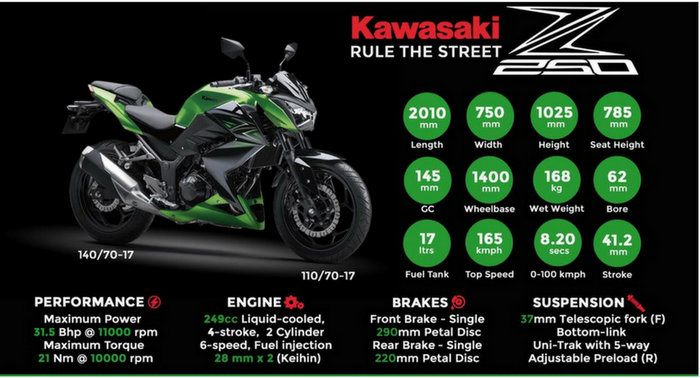 So, while Kawasaki Z250 did at one time prove to be people’s choice of wheels as an entry level bike, it lost out to Ninja 300 ABS. With the latter soon working its way up, Z250 sales came to naught. As such doing away with the bike serves Kawasaki in good stead as they could concentrate on what customers here want as against continuing to push a bike that’s fallen out of favour.

Drawing inspiration from bigger Z series bikes, Kawasaki Z250 gets power from a 249cc fuel-injected parallel-twin, liquid-cooled engine and returns 32bhp, and 21Nm of torque, mated to a six-speed gearbox. Braking is undertaken by a 290mm disc brake up front, and a 220mm rear disc brake. It’s USP was such that it didn’t find any competition in the segment in India.

On the price front, Kawasaki Z250 was sold at a bit over Rs 3 lakhs, quite similar to the pricing of Benelli TNT 300. If the brand were to look at a replacement for Kawasaki Z250, it could introduce the Z300, or Z400. But again, a reasonable price point would be essential for either bikes to carve a niche for itself. The Z300 could benefit from Ninja 300’s current business proposition.