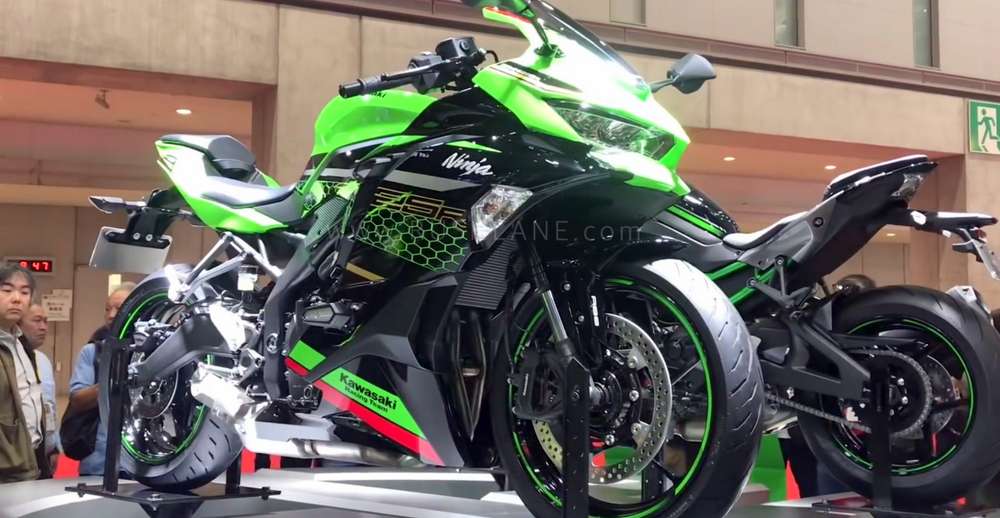 Kawasaki has shown off the new Ninja 250 with 4 cylinder engine. Called the Ninja ZX-25R, the quarter liter offering is now on display at the 2019 Tokyo Motor Show. It can be seen in a strikingly similar design borrowing design elements both from the Ninja 400 and the ZX-6R.

It receives aggressive styling with dual horizontal headlamps, a pointed nose fairing, muscular fuel tank and sharp tail section. It is positioned on a trellis frame made of high tensile steel and is seen in colours of Lime Green and Ebony Black.

The new Kawasaki ZX-25R gets a host of on board electronics which is normally seen on larger displacement bikes. These include Kawasaki Traction Control and Kawasaki Quick-Shifter and it also gets a Power Mode. Below is the first look walkaround video.

The new Ninja ZX25R gets USD front fork set up and horizontal back link type at the rear with SFF-BP (Separate Function Fork-Big Piston) technology resulting in different right and left tube contents. Braking is via disc brakes at both ends with monoblock radial calipers in the front.

The engine is of 249cc capacity and is a liquid cooled, in-line, fuel injected engine with DOHC with a 16 valve system and though power and torque outputs have not been revealed as on date, this engine could produce around 60 PS power.The ZX-25R will be the most powerful production 250 cc motorcycle on the planet.

Kawasaki has not revealed any details of launch of pricing as on date, but it will launch in international markets sometime in the coming year. It will enter production at the Kawasaki Motorcycle and Engineering division, a part of the Kawasaki Heavy Industries. The same place where the Ninja H2 is made.

It will be sold in Indonesia via the CKD route and prices could range between IDR 100 million and IDR 130 million. This is about Rs 5 lakh to Rs 6.5 lakh. However, considering its premium pricing, launch in India is not immediately on the cards. But considering that Kawasaki launched the Ninja H2R here, they can also launch the ZX25R here as a CBU.