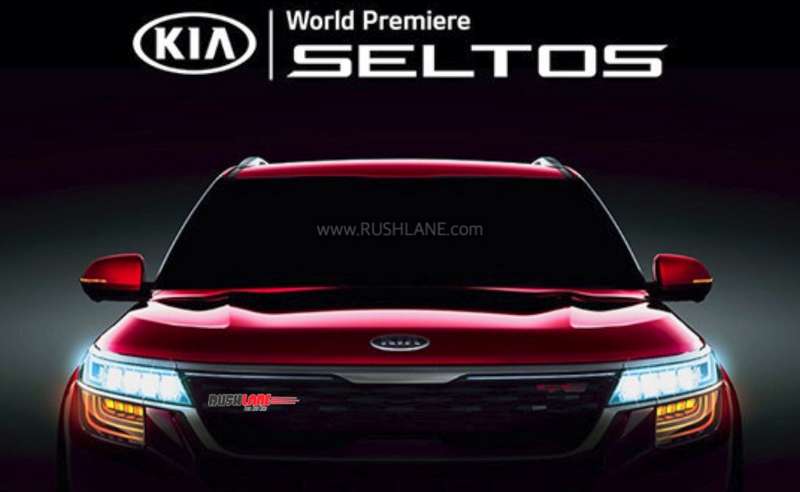 Kia Seltos, a subcompact crossover SUV, will be making its global debut in India, in just a few days, on 20th June 2019. It is the company’s first product in India, with launch scheduled for September. Seltos will be produced at the Kia Motor’s manufacturing unit in Anantapur in Andhra Pradesh and enters a highly competitive segment in the country.

Kia Seltos, earlier known as the SP2i, front has now been revealed. This video, uploaded in YouTube shows off its distinctive and attractive Wine Red colour scheme. It also details some of its exterior features with a tiger nose grille, sleek headlamps with chrome accents and a shark fin antenna.

The video also details its dual tone machine cut alloy wheels, the LED rear tail lamps and LED DRLs. The video ends with a silhouette of the new Seltos giving us some idea of what the production ready model would look like.

Earlier images also details some of the interiors which are done up in an all black color scheme. It gets leather seating, wood inserts and brushed aluminum accents.

One striking feature is a Bose sound system which will add a premium touch to the Seltos, especially since this 5 seater SUV is directed at a younger and more adventurous set of buyers in the country. It also gets head-up display, which no car in the segment currently offers in India.

Kia Seltos will get its power via BS VI compliant 1.5 liter petrol and diesel engine options which will come in with manual and automatic gearbox options. No power and torque figures have been announced as on date and could be revealed closer to launch.

The Kia Seltos is expected to be priced between Rs.10-16 lakhs, a price range in which it will compete with the Hyundai Creta, Renault Captur, Nissan Kicks, Tata Harrier and the likes.