South Korean automaker Kia Motors announced its Indian debut back in August 2019 with the launch of the Seltos. Needless to say, the mid-size crossover has become an instant success. It is accessible to a relatively larger customer base as well thanks to a wide range of trims (+20 in number, including dual-tone options). Available in three engine and four transmission choices, there is a Seltos variant for almost every potential buyer in the segment. Hyundai Motor India has applied the same formula in the latest 2020MY Creta.

One cannot deny that the Kia Seltos is a good-looking product (except for some overboard bits like the extended LED DRL). While the new Hyundai Creta is arguably better on paper, it falls behind the Seltos in terms of looks. With the right touches such as wheels, de-chroming, etc., the Seltos could look even better.

Kia Motors’ Seltos is popular in its home market as well. With identical looks to that of its Indian counterpart, the Korean-spec Kia Seltos is sold in two formats (with optional AWD): 1.6-litre turbo petrol and 1.6-litre diesel. Here’s a modified 1.6 turbo petrol example with almost an entire accessories shop fitted on it. 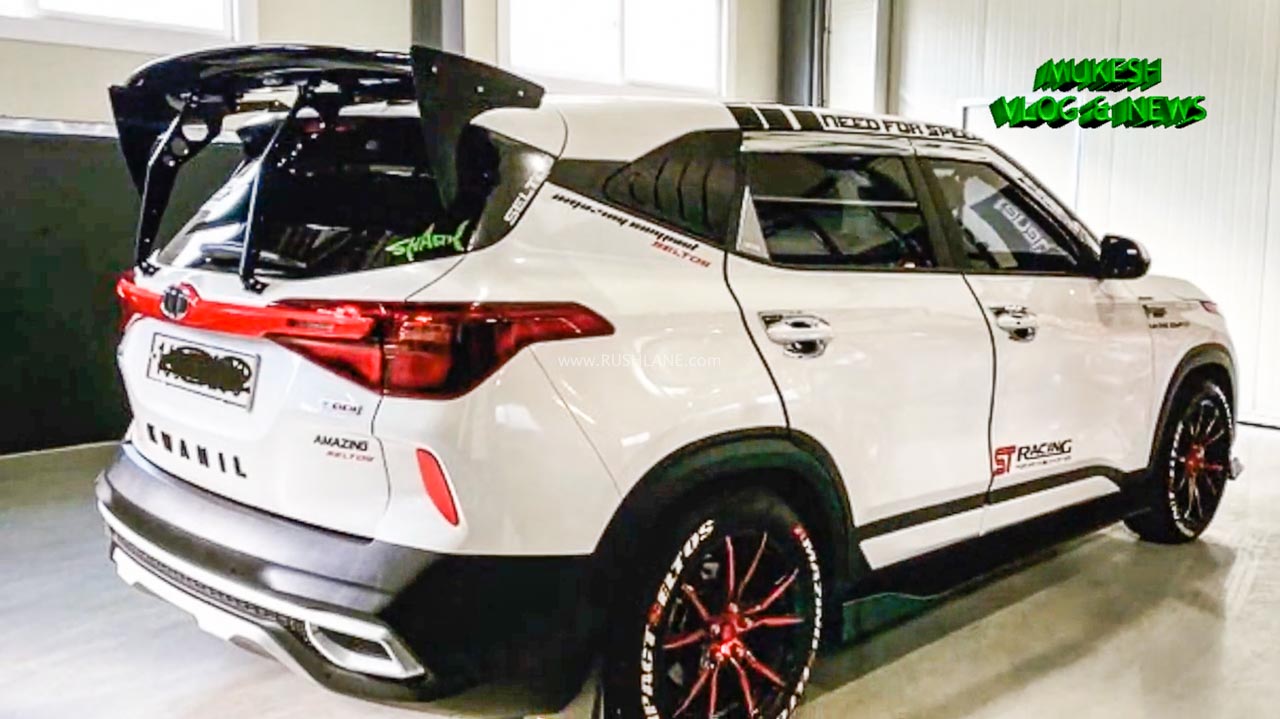 Compared to its stock format, the crossover sits much lower. On a matte black base, the owner has opted a multi-colour treatment on the grille. Inspired by a popular range of premium SUVs, ‘S E L T O S’ lettering replaces the Kia badge. At the bottom, there’s are a large splitter (obviously not functional) that sticks out considerably from either side.

Coming to the side profile, the large wine-red five-spoke wheels grab all attention. The stock rubbers have “AMAZING SELTOS” written across their walls. Certain individuals on social media commented that it should be “amusing” rather than “amazing”. To be honest, it is quite difficult to list down all the modifications done to it just like the justifiability of that enormous rear wing. Step inside and one can observe more ambient illumination than interior panels.

Put in a different perspective, the customisation is more like an unnecessarily long sentence without a full stop. However, it is none other than the owner’s hard-earned money that was spent on this and all criticism end there. Images are credit to Youtube channel Mukesh Auto Vlog & News.

As mentioned before, this Seltos variant is powered by a 1.6-litre turbo petrol GDi mill packing roughly 175bhp. On the other hand, the analogous 1.4-litre turbo motor available in India churns out 138bhp.