The Kia Sonet compact SUV, which made its global debut on August 7 in India, is now open for bookings. Bookings can be made either via company dealerships or on the company’s online portal at a down payment of Rs.25,000. The demand has been so high, that in just 24 hours of bookings getting open, Kia has recorded 6,523 bookings of Sonet SUV.

Likely to have derived its name from the term SOcial NETwork, Kia Sonet is the most connected compact SUV. Its production has commenced at the company plant in Anantapur, Andhra Pradesh. The compact SUV in a 5 seater layout will be 3,995mm long, 1,790mm wide and 1,647mm high with its wheelbase at 2,500mm. It receives ground clearance of 211mm and boot space of 392 liters along with a fuel tank of 45 liter capacity.

Mr. Kookhyun Shim, Managing Director & Chief Executive Officer, Kia Motors India said, “The tremendous response to the all-new Sonet, proves that there is never a bad time to launch a good product. It also shows that the faith of Indian consumers in Brand Kia has grown leaps and bounds over just one year of our operation in India. With the Sonet, we offer customers a product that boasts world-class quality, powerful design, cutting-edge technology, unparalleled features and a staggering variety of options. I would like to assure the customers that Kia Motors is fully committed to delivering their Sonet in the least time possible with our Anantpur plant operating with optimum efficiency.”

As was also seen in the case of the Kia Seltos, the Sonet will also be presented in Tech Line and GT Line. The Tech Line variants will include the entry level HTE, HTK, HTK+, HTX and HTX+ while the GT Line will be available exclusively with a GTX+ variant. Exteriors will see a tiger nose grille, LED head and tail lamps along with LED DRLs and projector fog lamps. It is also seen with faux skid plates, mesh grille for the lower air dam and front parking sensors positioned just above the air dam. The Kia Sonet sits on 16 inch crystal cut alloy wheels with 215/60 cross-section tyres.

Its interiors will get several segment first features and UVO technology with as many as 57 connected features. There will also be a 4.2 inch digital instrument cluster, multi function steering wheel, 10.25 inch touchscreen infotainment system displaying navigation and live traffic updates and other vital information. 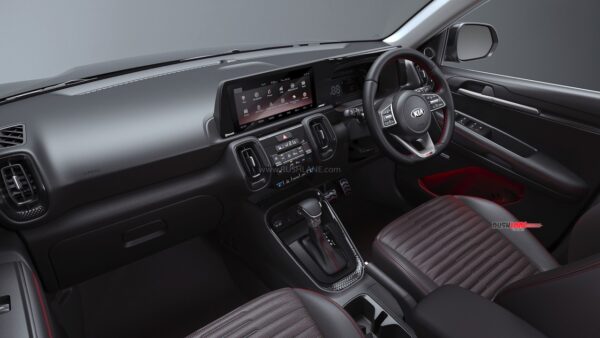 The driver and front passenger seats are ventilated while in view of the current pandemic situation, the automaker has also added a smart pure air virus purifier. Other interior features include a Bose 7 speaker audio and sub woofer, LED sound mood lighting and wireless charging for smartphone. Remote engine start, multi drive modes, traction control, OTA map updates and a sunroof will also be seen on the new Sonet which also gets segment first 360 degree camera.

Even as there is no confirmation from the company, the Kia Sonet could be priced between Rs.7-13 lakhs. It will be an aggresive pricing strategy, to rival in sales with Hyundai Venue, Maruti Suzuki Vitara Brezza, Ford EcoSport, Tata Nexon, Mahindra XUV300. It will also have the upcoming Renault Kiger, Toyota Urban Cruiser and Nissan Magnite to contend with.