Kia Sonet Brochure Leaks Ahead of Launch in Sep 2020

Kia Motors, having noted outstanding success with both the Seltos and Carnival, now plans launch of the new Sonet sub 4 meter SUV sometime in September. The Kia Sonet was showcased in concept format at the 2020 Auto Expo and was recently revealed in production ready format.

It will be offered in a 5 seater layout and will be the automakers most affordable offering. It’s estimated to be priced between Rs. 7 lakh (for entry level Tech Line variant) going up to Rs. 12 lakh (for the fully loaded GT Line variant).

As was also seen in the case of the Kia Seltos, the Sonet will also be offered in two variants of Tech Line and GT Line. It will be positioned on the same platform as the Hyundai Venue with which it will also share its petrol and diesel engine lineup. Leaked brochure of Kia Sonet confirms new details. 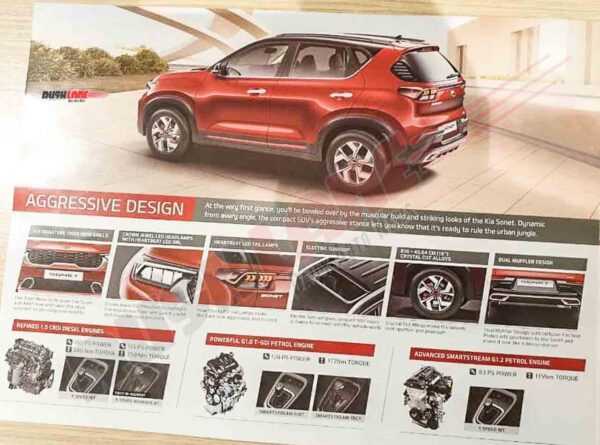 Diesel engine is in the form of 1.5 liter 4 cylinder engine, which also powers the Seltos. This engine option on board the Sonet will be offered in two tunes of 100 PS / 240 Nm and 115 PS / 250 Nm. Transmission option for the former is 6MT while for the latter it is 6 AT. Below is the detailed tech specs.

Loaded to the brim with features, Kia Sonet leaked brochure details how it will be better than competition. Below are the feature highlights of Kia Sonet.

Touchscreen Infotainment System – The automaker has confirmed that the Sonet will offer the segment’s largest 10.25 inch touchscreen infotainment system sourced from the Seltos. It will be compatible to both Android Auto and Apple CarPlay.

Ventilated Front Seats – Though this is a feature already seen on the Hyundai offerings such as Elantra, Creta and Verna and on Kia Seltos and Carnival, it is for the first time that ventilated driver and front passenger seats will be offered in a sub compact SUV in India. 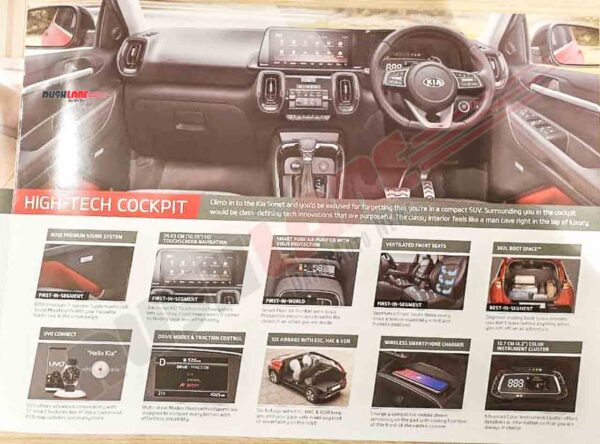 Air Purifier with Display – In view of the air quality index in major metros being as it is in India, this is a vital feature which purifies in-cabin air. As on date, considering the COVID-19 pandemic situation in the country, this Smart Pure Air Purifier with virus protection is an added benefit. This has a two level purification system. The pollutant cleanser HEPA filter incorporates N29 using fibers made from nano-ionic bonding technology of copper sulphide thus removing all pollutants and bacteria from the cabin. The second level of filtration is via UV LED which is proved to kill both bacterial and virus.

Electric Sunroof – This is a vital feature which raises the premiumness of any car of today, even as it was considered a luxury in older models.

Wireless Mobile Charging – In today’s world, charging on the go is a much desired feature. Kia is offering wireless charging mobile charger as well with the Kia Sonet. 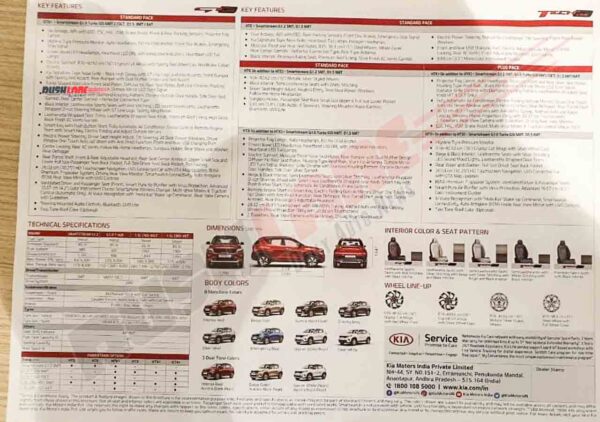 Traction Control in GT Line Variant – The sportier Sonet GT Line variant gets Traction Control System which is a vital safety feature that is highly efficient when taking on difficult road surfaces or while driving in challenging weather conditions.

Drive Modes in GT Line Variant – Also offered on the top of the line GT Line trim, there are three drive modes of Normal, Eco and Sport. Drivers will be able to select the suited mode with the system altering the throttle response, steering feedback and transmission shift points.

Tyre Pressure Monitoring System and Front Parking Sensors – These two very special safety features are seen on the Kia Sonet. Tyre pressure can also be checked via the UVO app while front parking sensor is a segment first feature.

Full LED Head and Tail Lights – Kia Sonet top end variants get LED lamps at the front and rear long with integrated LED DRLs in the front and an LED bar spanning the boot.