South Korean automaker Kia Motors has already made a strong statement on the Indian market with the success of its Seltos compact crossover. At a higher price point, the Kia Carnival minivan (new-gen unveiled globally) is also finding a decent number of takers in a segment formed by itself. Kia Motors India has major plans for our market thanks to the initial success it has witnessed.

The company is almost ready to launch the highly-awaited Sonet sub-four-metre subcompact crossover or “compact SUV”. In the last couple of weeks, we have shared almost everything regarding the vehicle except for its final ex-showroom pricing. Since it shares internals and platform with Hyundai Motor India’s Venue, one can expect a similar pricing strategy. For reference, the 2020MY Hyundai Venue BS6 comes at a starting price of Rs 6.70 lakh ex-showroom.

Kia Motors India’s third and latest product has already impressed the industry by securing 6,523 bookings (for a token amount of Rs 25,000) on the very first day. Unverified sources reveal that the figures have now crossed the 10,000 units mark. Variants of the Kia Sonet which has received huge bookings are Diesel Automatic Base (HTK+), Diesel Automatic Top (GTX+) and Petrol Turbo DCT GT Line (GTX+).

Due to such overwhelming demand, the brand’s Anantapur manufacturing facility plans to expand production to three shifts. In addition to this, the plant targets yearly exports of 50,000 units. Yes, Kia India will be exporting the Sonet to multiple global markets. Seltos and Sonet exports could possibly make Kia the No 1 car exporter in the coming months. 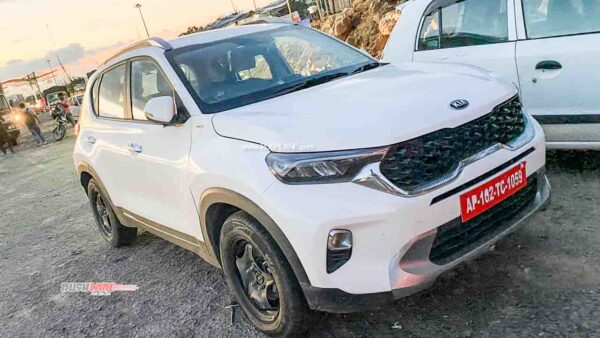 Once launched, it will play in one of the most competitive segments on the Indian automotive market. Rivals include the Mahindra XUV300, Tata Nexon, Hyundai Venue, Renault Kiger, Nissan Magnite and Maruti Suzuki Vitara Brezza.