Ahead of its launch next month, Kia Sonet display car has now arrived at a company authorized dealership in Hyderabad. Production of Sonet has already started at company plant in Anantpur, Andhra Pradesh. The test drive / display car seen in the spy shots here, is the top of the line variant with 1 liter turbo petrol 7 DCT gearbox.

Kia Sonet boasts of a contemporary and youthful exterior and is said to be loaded with 30+ segment first features which will be seen across its exterior design, interior comforts, infotainment and performance. Its ‘Wild By Design’ theme is further emphasized in its Crown Jewel LED headlamps, ‘Heartbeat’ LED DRLs with integrated side turn indicators.

Other lighting includes auto headlamps, projector fog lamps and ‘Heartbeat’ LED tail lamps which are connected with a reflector strip. The Kia Sonet, according to a leaked document will measure 3,995mm long, 1,790mm wide and 1,647mm high. Its wheelbase measures 2,500mm and ground clearance stands at 211mm.

Its ‘Wild’ exteriors are further highlighted by Turbo shaped skid plates, dual muffler and diffuser at the rear, shark fin antenna, sunroof and roof rails. The Kia Sonet sits on 16 inch alloy wheels and gets a quarter glass C Pillar with several chrome accents across its exterior adding to its sporty appeal.

Kia Sonet interiors show off a number of luxury and first in class features. It gets well ventilated driver and front passenger seats finished in black coloured premium material, LED mood lighting, wireless smart phone connectivity, remote engine start and OTA map updates. With UVO technology, which boasting of as many as 57 connected features, the Kia Sonet is one of the cleverest in its class.

Infotainment is via segment’s largest 10.25 inch touchscreen system while it also receives a Bose 7 speaker sound system with sub woofer. In view of the current pandemic situation in the country, Kia Motors has fitted the Sonet with a special pure air purifier with virus protection.

The Sonet comes in with a long list of safety equipment. It is fitted with a total of 6 airbags to include front, side and curtain, brake assist, front and rear parking sensors, highline tyre pressure monitoring system, ISOFIX child seats and features such as ABS with EBD, ESC, HAC and VSM. 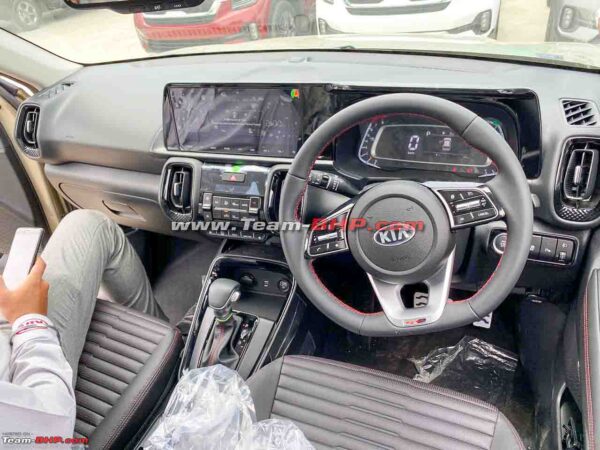 Positioned as an all-new smart urban compact SUV, bookings on the first day itself reached 6,523 units. The company has assured buyers that production will be ramped up to keep up with demand, so as to ensure shorter waiting periods. Kia Sonet will be a global model with India being an export base. Prices will be revealed at the time of launch.

Once launched, it will have to take on stalwarts such as the Maruti Suzuki Vitara Brezza and Hyundai Venue. It will also have to contend with the Mahindra XUV300 and the soon to be launched Toyota Urban Cruiser and Nissan Magnite.