Kia recently started accepting bookings of the Sonet, and has already received some warm response on Day 1. Despite a booking amount of INR 25,000, Kia managed to get 6,523 bookings on the first day itself. That’s a collection of more than Rs 16.25 crores in just 1 day. This clearly goes on to showcase the amount of enthusiasm the masses have for the compact SUV, despite the ongoing pandemic.

Now, ahead of the launch, spotting incidents of the non-camouflaged Sonet test mules have increased considerably. Recently, YouTube channel Abhishek Saini spotted a Kia Sonet variant test mule on Delhi roads. This test mule has features from both, HTK+ as well as HTX+.

Kia Sonet HTK+ is mid variant. It sits exactly between the line-up of variants on offer with Sonet Tech Line. These are HTE, HTK, HTK+, HTX and HTX+. Of all variants on offer with Sonet, this is the only variant which will be offered with all engine and transmission options. HTX+ on the other hand will only be offered with 1.0 liter turbo petrol (iMT / 7 DCT) and 1.5 liter diesel (6MT). Below is a detailed look at the video.

The features which are seen on this test mule, which are not part of HTK+ are – led headlamps and rear wiper. This makes it a bit confusing to understand which variant this actually is. Maybe it is a pre-production test mule, where Kia has been trying different features on offer. 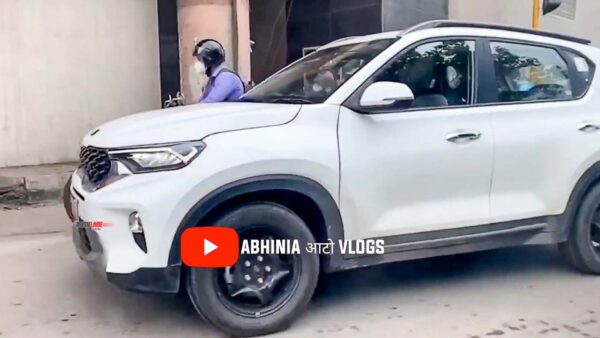 The GT Line will have only one variant, which will be the GTX+, which will also serve as the top of the line variant of the Sonet. For a detailed variant-wise analysis of all the features, you can check out our report here.

Launch of the Sonet is expected to take place in the month of September. While pricing related details aren’t out, we expect the pricing to be in the INR 7 – 13 lakhs bracket. Post launch, the Sonet will be competing with the likes of Maruti Vitara Brezza, Hyundai Venue, Mahindra XUV 300, Tata Nexon and Ford EcoSport. Additionally, new contenders like Toyota Urban Cruiser, Renault Kiger and Nissan Magnite will also be targeting the same set of customers.