Kia Motors India has already opened bookings for its all-new subcompact crossover, Sonet at a token amount of Rs 25,000

South Korean automaker Kia Motors has got only two products in its India portfolio: Seltos compact crossover (updated for 2020MY) and Carnival minivan (new-gen debuted globally). Now, Kia Motors India is ready to launch its third and most affordable offering, Sonet subcompact (sub-four-metre) compact crossover or “compact SUV”. The new Kia Sonet has already started reaching company outlets across the country. Bookings are open at a token amount of Rs 25,000.

Select dealers of Kia India, have officially unveiled the car at their showroom. One of them is Taapasi Kia, located in Bangalore. The dealer organized a grand event to unveil the car in front of fans and those who have booked the Sonet. This is the first time people have gotten a chance to experience Sonet in person.

Kia Sonet will be launched next month. Ahead of that, all Kia showrooms in India will have the Sonet on display. Test drive has not started as of now, but is expected to start in the coming days.

It is not news that the Kia Sonet is mechanically identical to Hyundai Motor India’s successful mid-level product, Venue. A similar approach was followed for the new-gen Hyundai Creta and Kia Seltos as well. Besides its Hyundai sibling, the 2020MY Kia Sonet will rival the Mahindra XUV300, Tata Nexon and Maruti Suzuki Vitara Brezza. At a later stage, products such as the Toyota Urban Cruiser (basically a “Toyota Brezza”), Renault Kiger and Nissan Magnite will join the party.

The Kia Sonet has marked success even before launch. Bookings touched more than 6,500 units on the very first day and shot past 10,000 units in a short span. Data shows that diesel AT HTK+, diesel AT GTX+ and turbo petrol DCT GTX+ variants have the highest demand. In total, there are six trims in two packs: Tech Line (HTE, HTK, HTK+, HTX and HTX+) and GT Line (GTX+).

The highly competitive “compact SUV” segment generally plays in a price point below Rs 12-13 lakh. For reference, the 2020MY Hyundai Venue BS6 prices range from Rs 6.75 lakh to Rs 11.63 lakh. The Kia Sonet should arrive with a similar pricing strategy, but interestingly, its starting price tag might undercut the Hyundai Venue’s by almost Rs 15,000.

In other words, the much-awaited Kia Sonet could be launched at Rs 6.60 lakh (NA petrol manual HTE) and capped at around Rs 12.90 lakh (diesel AT GTX+). All figures mentioned here are ex-showroom, Delhi. 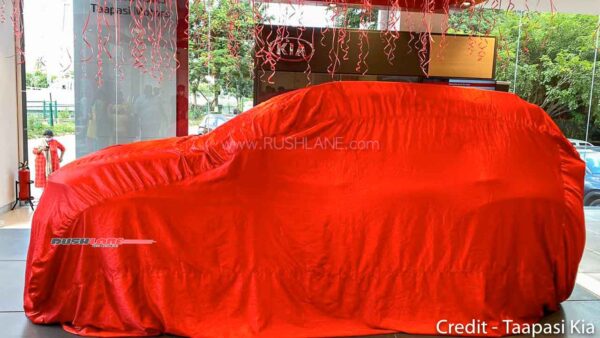