With the launch of KTM 250 Adventure, a comparison with its nearest rivals- Himalayan, G 310 GS and 390 Adventure is in order

After a long and ardent wait, KTM finally launched its entry-level adventure motorcycle in India. The 250 Adventure had been in development for more than a year and had been spotted testing on Indian roads on multiple occasions. Priced at Rs 2.48 lakh (ex-showroom) it is offered as an affordable alternative to its competitors.

However, it is still not the most affordable in this range. While it comes out as an attractive option it does have its fair share of hits and misses. Let us find out how it stands up against its close rivals Royal Enfield Himalayan, BMW G 310 GS and its own elder sibling KTM 390 Adventure. 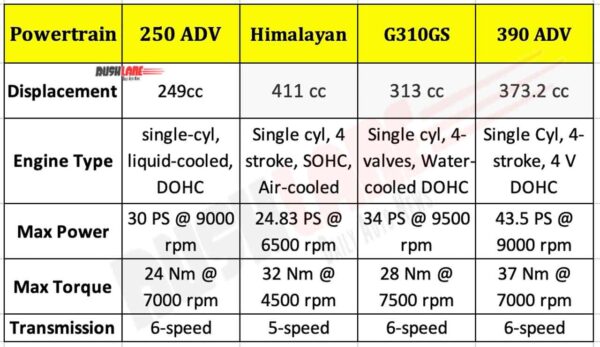 The 250 Adventure is by far the smallest in this range in terms of displacement although it is not the least in terms of output. Ironically, it is the largest displacement motor from Himalayan which produces the least output. This is because while all bikes are powered by single-cylinder units, the Himalayan gets a single overhead camshaft instead of double cams like the rest.

390 Adventure’s 373.2cc unit produces the highest output of 43.5 PS and 37 N of torque. All, barring Himalayan, come with a 6-speed transmission. The Royal Enfield is offered with a 5-speed unit. Also, Himalayan is the only bike to miss out on a slipper clutch with an assist. I guess we know why Himalayan is the most affordable in this space.

The 250 Adventure is almost identical to its older sibling except its height. While the former stands at 1263mm, the latter stands at 1400mm. In other respects, all bikes measure almost similar. The Himalayan is the heaviest in this space at 199kg. It also gets the highest ground clearance of 220mm.

While none of these motorcycles can’t be defined as hardcore off-roaders meant for trail bashing, the Himalayan is definitely more suited to take on the rough paths. The KTM siblings and BMW G 310 GS are more tourers which can do occasional off-roading. Himalayan gets conventional telescopic front forks while the rest are equipped with upside-down forks. Rear suspension units of all bikes are equipped with a preload adjustable mono-shock. 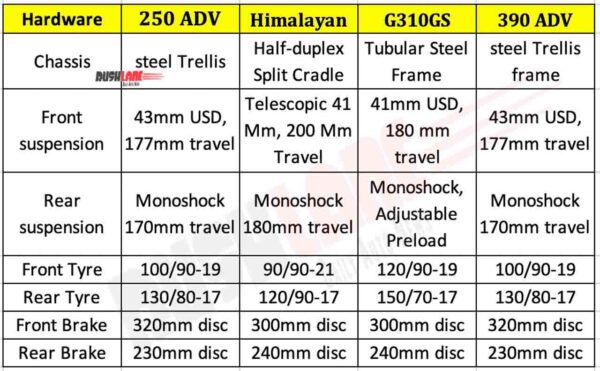 However, Himalayan leads the pack when it comes to suspension travel with front travel of 200mm and rear travel of 180mm. This is what makes it a competent off-roader. Although all bikes come with switchable ABS at the rear. Disc brakes with dual-channel ABS are offered as standard on all four bikes. Another point of difference while all get tubeless tyres, Himalayan gets tubed tyres.

KTM 390 Adventure continues to lead this space in terms of features quite appropriately since it is the most expensive too. It has a wide equipment which consists of a 5-inch TFT colour infotainment system with Bluetooth connectivity, Off-Road Mode, MTC (lean angle sensitive), bi-directional quick shifter, traction control and cornering ABS. 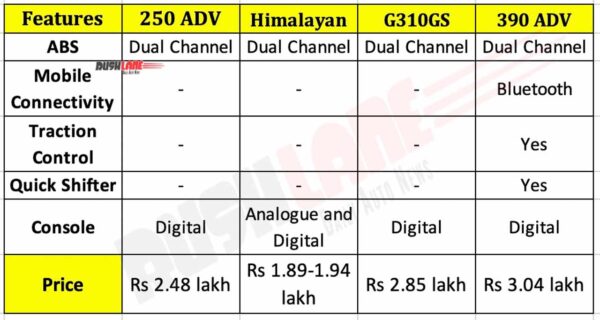 The latest iteration of G 310 GS, like 390 Adventure, also comes with multiple riding modes with ride-by-wire technology. All get digital instrument consoles except the Himalayan which gets a part analogue and part digital console. All bikes get a halogen headlight except the 390 Adventure which gets an LED headlamp.

Royal Enfield Himalayan is by far the most affordable of the lot. Quite expectedly, it comes with the least number of gizmos while KTM 390 Adventure justifies its high premium with features on offer. In fact, it also gets the most powerful engine of the lot.