KTM India, under Bajaj Auto, has made a strong statement on the Indian market after launching the 390 Adventure dual-sport motorcycle. It is arguably the best single-cylinder motorcycle on sale today, with good value for money in terms of output and equipment. Worthy rivals include Royal Enfield’s Himalayan and BMW Motorrad India’s G 310 GS (yet to receive BS6 update). The 2020MY KTM 390 Adventure comes at a starting price of Rs 2.99 lakh ex-showroom.

The Austrian motorcycle manufacturer has already confirmed that a lesser ‘250’ version will be introduced in its Adventure range. Similar to the usual trend, KTM India’s upcoming 250 Adventure will share its assembly line and internals with existing ‘250’ models. It was only recently that the KTM 250 Duke received a major update.

Bajaj Auto’s Chakan manufacturing facility, home to Indian-spec KTM and Husqvarna products, also makes the KTM RC250 for exports markets. A random KTM 250 Adventure prototype has been spotted whilst being tested on public roads. Images are credit to Prem Kumar. 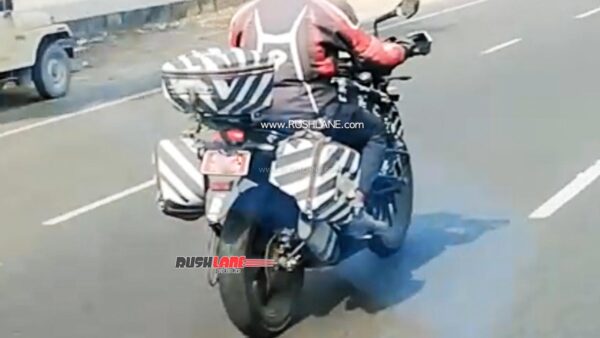 The quarter-litre adventure tourer was spied multiple times over the months, but this particular example looks production-ready than ever before. In addition, it is seen with off-road accessories.

Since KTM India has updated all its products to BS6 emission norms alongside some welcome cosmetic and mechanical changes, it is safe to assume that the 250 Adventure would be launched soon. Rumours suggest that KTM India is aiming for this festive season, after which it could potentially be the most desirable choice in our market’s growing 250cc single-cylinder segment. Speculative pricing stands at roughly Rs 2.40 lakh ex-showroom.

As mentioned before, the KTM 250 Adventure will borrow several components from familiar ‘250’ models. Powering the dual-sport motorcycle is a 248.8cc liquid-cooled DOHC single-cylinder engine good for 30.57bhp @ 8,000rpm and 27.4Nm @ 6,500rpm. Coupled to 6-speed gearbox, the unit is identical to the one powering Husqvarna Motorcycles India’s Svartpilen 250 and Vitpilen 250. However, riding characteristics would be considerably different thanks to offroad-focused sprockets.