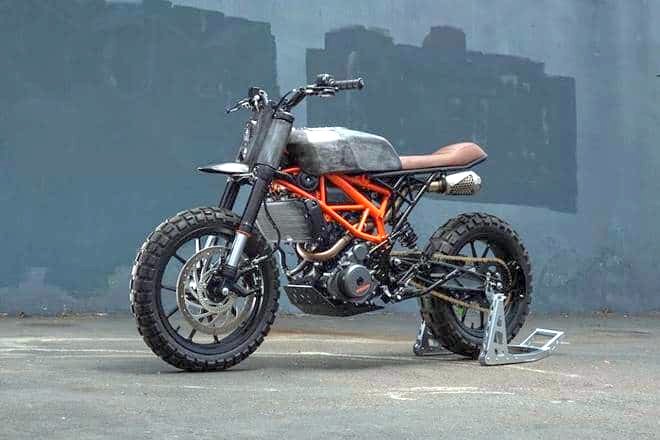 With its stunning design, high-end features, powerful 373 cc engine, and reasonable pricing, KTM 390 Duke has remained one of the preferred choices for bike modifications. In the latest customization project, leading bike builder Colt Wrangler Lyons has carried out a complete overhaul of 390 Duke and even used components from a 70s Yamaha motorcycle.

In this customization job, an already naked 390 Duke has been further stripped of its meagre body cladding, resulting in an even lighter scrambler. Stock fuel tank has been removed and replaced with a unit taken from an old Yamaha RD400. Other stock components that have been completely removed include headlight, seat, tyre hugger, exhaust unit, rear tail section, and rear view mirrors. Stock tyres have also been replaced with aftermarket options meant for off-roading.

Colt started his career as a hobbyist, but now bike customization is a full-time business for him. This recent modification project on 390 Duke is a result of an earlier customization job that Colt had done on a 1970s Honda scrambler. One of Colt’s clients saw the Honda customization and was so impressed that he wanted something similar for himself. The client wanted a motorcycle below 500 cc and one that has USD forks and monoshock rear suspension, which is why KTM 390 was chosen for this customization project. 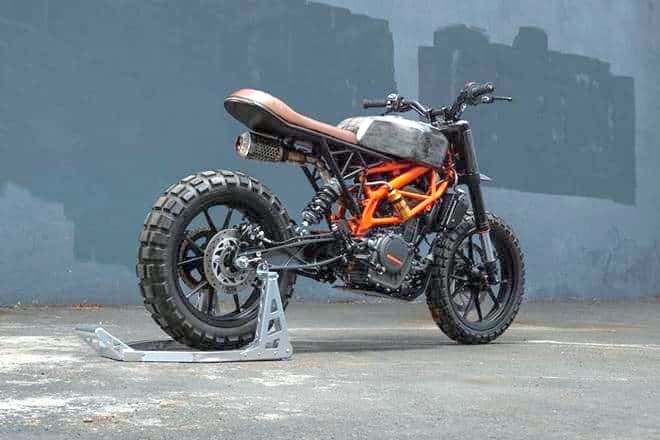 With the modifications, KTM 390 Duke has been stripped down to its bare bones, keeping only the engine parts, key mechanical components and the lightweight trellis frame. As weight has been reduced, the modified bike will have a higher power to weight ratio. One may think that professional bike builders are heartless creatures, but tearing down a brand new 390 Duke was tough even for Colt.

Other key modifications include removal of air box and emission regulation unit and replacing them with a K&N filter and a crankcase breather. Stock exhaust has also been removed and replaced with a stainless steel slip on unit that sits right under the seat. Below are more images of the modified KTM Duke 390.