The European-funded EMotion research project will use two technology demonstrators to develop a versatile, scalable and cost-effect EV architecture

A sketch of what is purported to be Bajaj Chetak-based KTM electric scooter is doing rounds on the internet. While it does have KTM branding on it and clearly derives its design inspiration from the manufacturer’s E-Speed electric scooter concept, it is certainly not related to Chetak.

The project EMotion is a European-funded research project which involves 11 partners with Austrian Institute of Technology (AIT) taking the lead. KTM Technologies GmbH and KTM AG are also part of this 3-year research project which aims to develop inexpensive, energy-efficient and comfortable electric two-wheelers belonging to European Category L electric bicycles. What you see in the sketch is merely a representation of one of the technology demonstrators which will be realized during the course of the project. 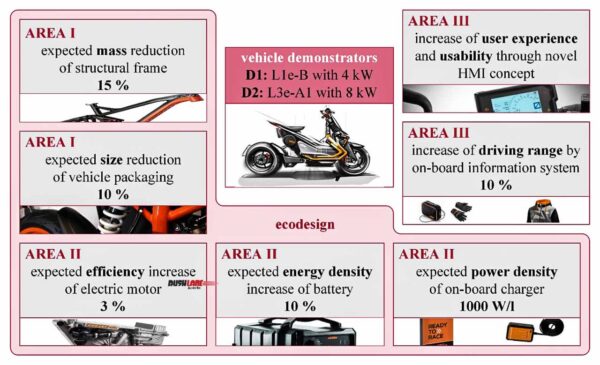 The research project will attempt to eliminate the weaknesses of current electric two wheelers by developing modular, scalable and highly efficient electric drives and batteries, with specific focus on reducing manufacturing and maintenance costs. Several technologies will be explored to maximize energy efficiency in addition to improving stability and handling.

Two technology demonstrators (one 4 kW and one 8 kW unit) are slated to be built in the first 8 months of the project. With KTM being the only two wheeler OEM among the 11 partners, we expect both the EMotion demonstrators to be built by the Austrian firm. The test prototypes will undergo pilot trials for 8 months in urban and rural environments around Salzburg area.

So, to recap, the KTM EMotion is not a product but a research platform which is expected to spawn several commercially viable technology solutions for compact zero emission mobility. Most of these solutions can be expected to be implemented on future KTM electric vehicles. The European research project is scheduled to conclude in February 2023.

KTM is indeed working on several electric two wheeler projects most of which will be made by Bajaj Auto in India. Bajaj will also develop its own versions based on the KTM electric two wheeler architecture. So, we won’t be surprised if we find solutions developed by EMotion research project on board future Bajaj EVs.