Austrian] two-wheeler manufacturer KTM has three single-cylinder BS6 model lines in its Indian portfolio: Duke, RC and Adventure. The range starts with the KTM 125 Duke in the 125cc sports category and goes up to the 390 Adventure in the 300-400cc sports tourer or dual-sport segment.

The faired KTM RC line has two variants: 200 and 390. Meanwhile, the KTM RC 250 is not available on the Indian market despite being assembled at Bajaj Auto’s Chakan manufacturing facility for exports.

KTM India might consider its launch at some point in the future, especially since the 390 Adventure is getting a trimmed-down ‘250’ sibling soon. There has not been a compelling choice in the 250cc faired-sports category since Honda Motorcycle India discontinued its CBR250R. 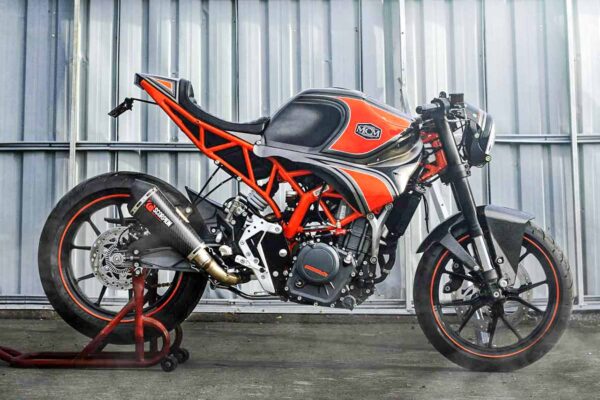 Minority Custom Motorcycle (MCM), based in Indonesia, has modified an RC 250 into a neo-retro cafe racer. Headed by Jonathan Evan, MCM has definitely chosen a challenging aesthetic approach in the project. One does not usually come across a faired motorcycle customised into a cafe racer, let alone a neat example. The motorcycle belongs to a client in eastern Indonesia.

Jonathan and his team have retained some of the original KTM DNA with its bright orange theme against dark metallic grey (in line with the engine’s shade). Minority Custom Motorcycle states that the project is a tribute to ‘60s cafe racers. It gives an insight into how a KTM cafe racer would look like. At present, the closest thing to a ‘KTM 250 Cafe’ is the Husqvarna Vitpilen 250.

Proper attention was given to change the angular looks of the donor motorcycle without any chances of abruptness in the final design. To make this happen, the RC 250 wears a handmade steel-sheet fuel tank of the same capacity.

Key highlights include single-seat layout, wasp tail cowl with integrated brake lamp; ‘halo’ LED headlamp + visor, custom clip-on handlebars, single-pod instrument console, Bridgestone Battlax tyres, stainless steel exhaust piping with Scorpion muffler and more. Extra bodywork had to be installed to cover off some of the electricals hidden by the stock fairing. The new clip-ons changed its original rider triangular substantially that MCM had to set the footpegs further back.