The Lamborghini Sian Roadster, limited to just 19 units, is already sold out

Italian marque Automobili Lamborghini has unveiled the Roadster variant of its newest and fastest V12 supercar, Sian. The new Lamborghini Sian Roadster bags the title of being one of the most powerful open-top production cars in the world. Limited to just 19 examples, every single unit was sold even before the car was unveiled to the general audience. Each of them is specified under Lamborghini’s Ad Personam customisation platform.

In Lamborghini’s words, the Sian Roadster is “a limited-edition open-top hybrid super sports car” employing the brand’s NA V12 power plant. The original FKP 37 hard-top variant (limited to 63 units) was introduced back at 2019 Frankfurt Motor Show. Visioned by Lamborghini’s Head of Design Mitja Borket, the supercar has also inspired the styling of an all-new luxury yacht dubbed ‘Tecnomar for Lamborghini 63’.

Lamborghini claims that the Sian siblings compile aesthetic elements from iconic classics created by ace automotive designer Marcello Gandini. We think the styling meets new extremes that may not be particularly impressive to ‘proper petrolheads’, but invokes a sense of occasion among the wider mass. However, it goes without saying that the internals set a high benchmark in the field of automotive engineering, dynamics, potential and lightweightness. 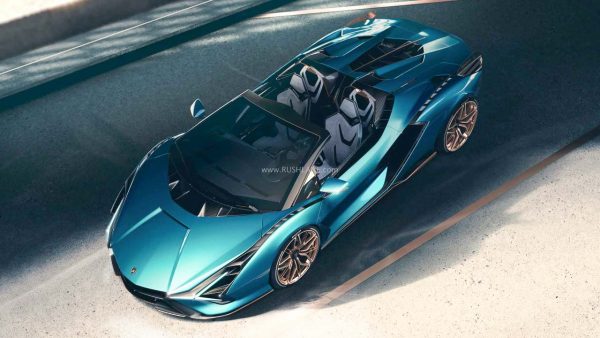 Unlike regular hybrids, the Sian (and Sian Roadster) utilises a supercapacitor-based energy system rather than batteries. Capacitors and supercapacitors would be the next big thing in electric vehicles since energy can be charged or discharged faster than a conventional lithium-ion battery pack, in addition to being lighter and more compact. In fact, such systems can charge and discharge at identical rates. The Lamborghini Sian’s supercapacitor-hybrid powertrain comes with a ‘power boost’ function that lets the driver draw instant torque to speeds up to 130km/h.

Another remarkable fact is that the entire electric department (motor + supercapacitor) weighs only 34kg. The system delivers an industry-leading power-to-weight ratio of 1.0kg/ps. Since products such as these are made available only to high-profile customers of the respective brand, there are virtually no alternatives to the Lamborghini Sian Roadster. Ferrari’s SF90 Stradale is another exclusive hybrid supercar.