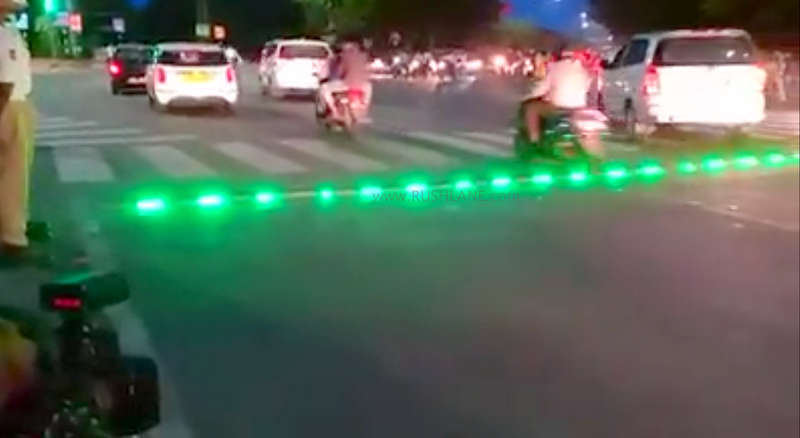 Introduced on an experimental basis, the Traffic Police of Hyderabad’s KBR Park junction should see fewer motorists and two wheeler riders breaking traffic signals. There are new LED speed breakers installed at traffic signals in the area which automatically switch from green to red and vice versa, coinciding with conventional traffic signals.

This new idea is being adopted on an experimental basis, and for a start only at Hyderabad’s KBR Park junction. It is a novel way to bring about better road safety especially in the case of motorists who blatantly break traffic signals with the excuse of not having noted the red light.

The LED lights are embedded into the road much in the same way as the cat eye reflector road signs. They are waterproof and hence neither gets affected by rain water nor water logging.

M Narsing Rao, Inspector of Traffic Police has stated that if this experiment proves to be a success, the installation of LED speed breakers will be implemented across the city. The flashing of these LED lights signals to the oncoming traffic the red or green traffic lights from a distance itself.

This allows the drivers to slow down well ahead of the junction. It is easily noticed even if the conventional traffic signals are blurred from  vision by trees, hoardings or other larger vehicles.

The LED speed breakers are connected to the output of traffic signal box and simultaneously change colours coinciding with traffic lights. This experiment is expected to have a great impact on drivers, urging them to obey traffic signals which will go a long way in reducing road accidents. It should prove to be a success which will see the use of LED speed breakers making their way to other roads, not only in the city of Hyderabad, but across the country as well.