To be young, and plan big things is the first step to many adventures. Mohith Gowda and Arun Aru are friends, and ride together. And whoever said you can only go on adventures on big bikes, clearly hadn’t looked at an adventure from the viewpoint of youngsters. The duo got on a Honda Dio scooter, and set off, and pretty much packed in all they could need along he way for their ‘Longest Scooter Riding’ attempt. Arun was the designated rider, while Mohit came on board as pillion rider.

Here’s a first hand account of the Longest Scooter Riding attempt from Mohith Gowda – Hai [sic] everyone this is Mohith Gowda. I wanted to say everyone in this group about our adventurous bike ride which was done by me and my friend Arun Aru. Our plan was to cover 3 countries (India,Nepal,Bhutan), 7000 kms in 19 days and 10 states in India, and our total budget was 20k (we decreased the budget by carrying the food for first four days and the last 6 days we ate only one time per day also we slept in petrol bunks instead of rooms). We have also applied for India book of records. 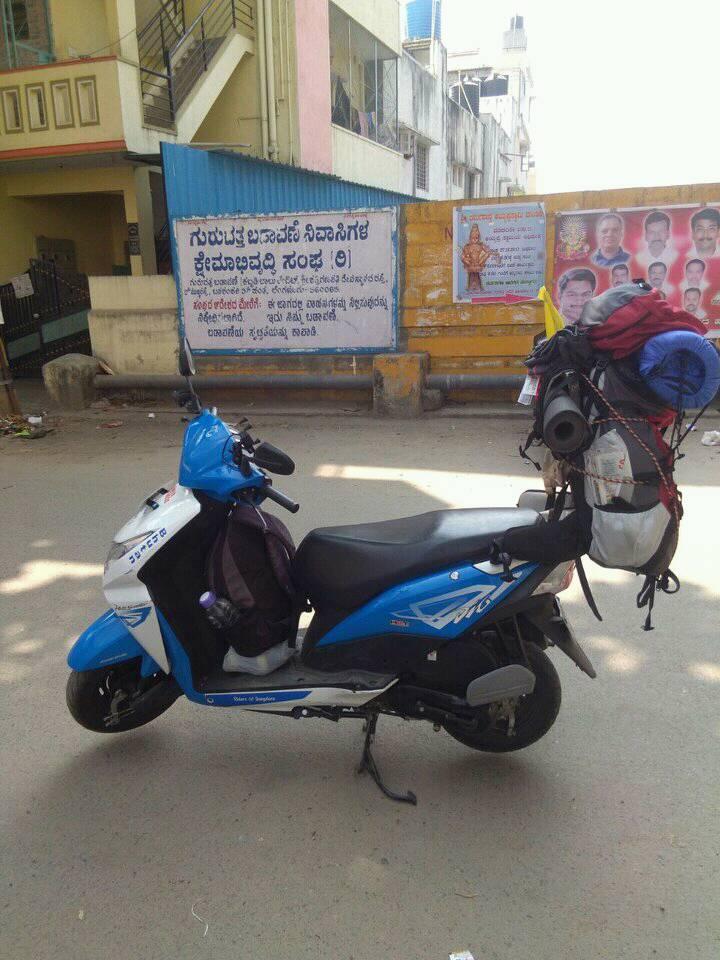 We started our journey in the last month Jan 23rd 12 pm in a single Dio scooty, and daily were able to cover around 400 kms per day in India but in Nepal and Bhutan, we were able to cover 200kms. In nepal we went to Nepal-China border (Tatopani)(while going to Tatopani the roads were very worst), Kathmandu and then we entered India, then we went to Darjeeling and through West Bengal, we entered Bhutan. After entering Bhutan, we directly went to Indian embassy office and got the permission. Then they sent us to the Bhutan immigration office to get the permission for our bike. There we got to know that scooties are not allowed inside Bhutan for ride as it is a royal nation, so, we were fully disappointed and came back.

While coming back we visited Swami Vivekananda’s house, Sun temple, Puri Jagan natha, Vizag and came to Bangalore by covering 3 countries (but not Bhutan properly) and 10 states(Karnataka, Andhra, Telangana, Maharashtra, MP, UP, Bihar, West Bengal, Odissha, Tamilnadu) in India. We finally ended our bike ride on Feb 12th night 11 pm by covering the total distance of 7200 kms in 21 days. 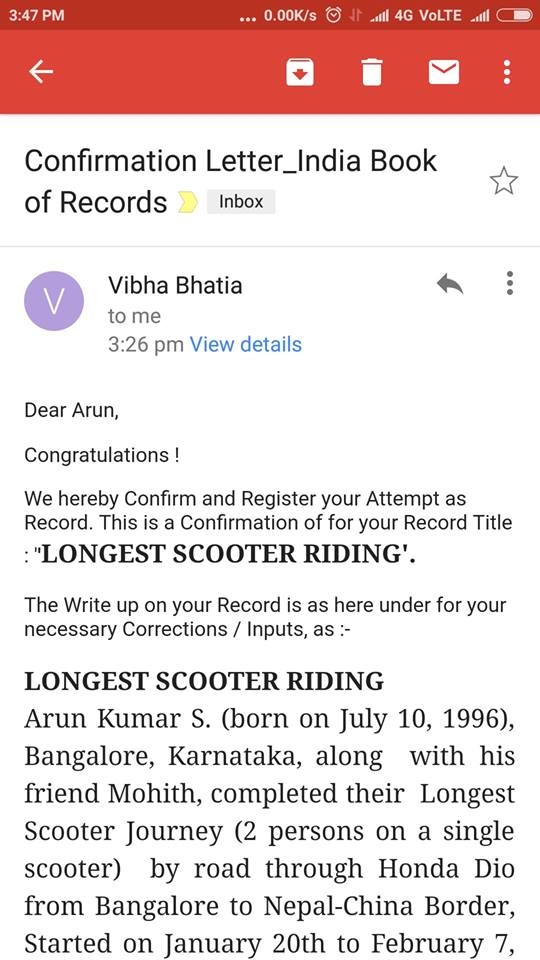 And alongside a great adventure, comes recognition. The duo now have a confirmation letter from India Book of Records for the title of ‘Longest Scooter Riding (2 persons on a single scooter)’ for their ride from Bangalore to Nepal-China border.

Talking about record rides, a week earlier, 25 yr old biker, Gaurav Siddharth confirmed his entry into Book of Guinness World Records for his 1.2 lakh km long ride across India, a feat he accomplished over two years of more than regular riding. With riding gaining popularity, there’s also a new breed of certified Long Distance Riders now. Individually set records are not accepted for qualification to LDR.