Flagship Mahindra SUV is priced at Rs.26.95 lakhs for the base variant while the top of the line fully loaded 4×4 version carries a price tag of Rs.29.95 lakhs. It is the top variant which has been purchased by Mr Mahindra. Unlike other Mahindra cars, this new SUV is sold exclusively through special ‘World of SUV’s’ dealerships with Relationship Managers appointed for each buyer. 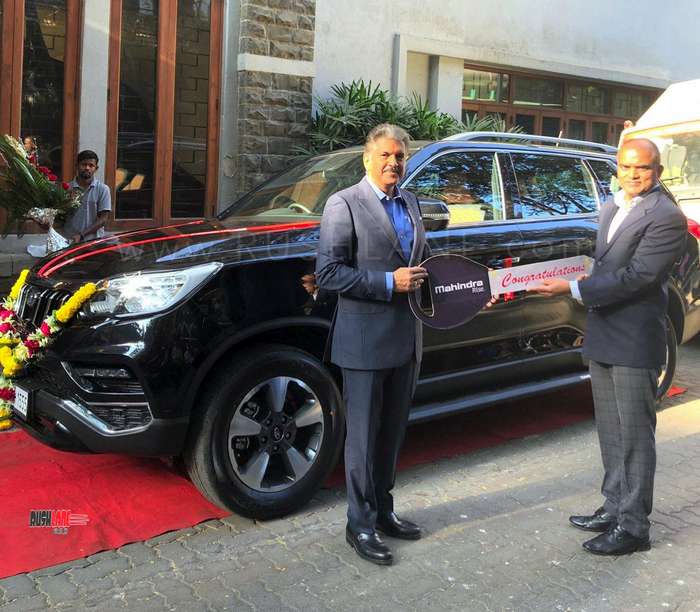 Speaking about his new car, Mr Mahindra tweeted – “Finally took delivery of my Alturas G4. I named my TUV 3OO plus the ‘Grey Ghost.’ Need a name for this new beautiful beast. All ideas welcome. The person who suggests the chosen name will get 2 Mahindra die cast scale models (Not the Alturas scale model—that’s not ready yet!)”

The tweet was posted about an hour back, and it already has received tremendous response. More than 1,800 likes, over 150 retweets and over 2,500 comments / name suggestions. Some of the name suggestions are – Dark Knight, India + Mahindra = Indra, Black Mountain, Kala Ghoda, Mahindra Bucephalus (Bucephalus was the horse of Alexander the great), Mahindra Everest and so on.

One of the name suggestion which caught attention of Mr Mahindra is Kalbhasma – Black Ash. It is suggested by @vidarbhaveer. The user adds, that “it is a Sanskrit word. Hope mahindra will dedicate some Sanskrit name to some model….someday.” To this Mr Mahindra replied, “Yes I would prefer to use a name this time from an Indian language…Keep the ideas coming…”

Based on the SsangYong Rexton G4, the new Alturas G4 is produced from the company plant in Chakan near Pune, Maharashtra. It boasts of outstanding exterior design and interior comforts. The Alturas receives HID headlamps with LED DRLs, LED fog lamps with cornering lamps and LED tail lamps. It sits on 18” diamond cut alloy wheels and sports dual tone roof rails. In terms of dimensions, the Alturas G4 measures 4,850mm in length, 1,960mm in width and 1,845mm in height.