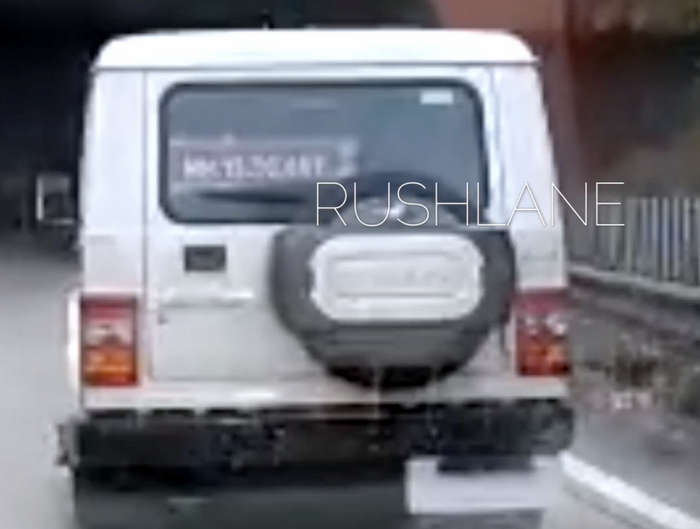 Despite any expensive updates, the Mahindra Bolero has been a cash cow for the automaker for years now. Thanks to its ability to withstand abuse from poor roads, low maintenance costs and flexibility, the Bolero continues to be immensely popular in the rural markets.

With the deadlines for mandatory crash tests and BS-VI emission norms fast approaching, it is about time that Mahindra’s best selling model by far receives an update. One of our readers recently caught a Mahindra Bolero facelift test mule on video.

Judging by the lack of camouflage (save for the front grille), Mahindra is not planning to fiddle with the SUV’s appearance. The Bolero’s boxy looks are very much the part of its charm and it is not surprising that the updated model carries forward the styling. We don’t expect to see too many changes on the inside as well.

The prototype is mostly likely testing the BS-VI version of the engine. The badge on the fender indicates that this is the sub-4m variant which is powered by 1.5-liter mHawk D70 three-cylinder engine which produces 70 bhp and 195 Nm of torque. The motor is paired with a 5-speed gearbox which drives the rear wheels.

The Bolero is also available in the regular variant which measures 4,107 mm in length and is powered the long-standing 2.5-liter m2DiCR diesel engine (62 bhp and 195 Nm of torque). Given the costs involved in upgrading a diesel engine to BS-VI engine norms, it is likely that Mahindra decides to use the more modern 1.5-liter mHawk unit across all variants of Bolero and put the larger displacement mill to rest.

We also expect the ladder frame SUV to be beefed up at least to clear the crash tests if not ace it. Needless to say, safety features like airbags, ABS with EBD, driver and front passenger seat belt reminder, speed alert system and reverse parking sensors will be offered as standard features across the entire lineup.