Mahindra and Mahindra, India’s third largest automaker recently revealed its sales performance for the month of December 2019. The Mumbai-based automaker sold 15,691 passenger vehicles (including Cars, UVs and Vans) in Dec’19, against a total of 15,091 vehicles in December’18, registering a 4% YOY growth.

The majority of growth came in from UVs, which are Mahindra’s specialty, a segment in which it grew by 10% while the ‘Cars & Vans’ segment registered a massive degrowth of 61%. However, if we look at the annual figures for the financial year, YTD data reveals that Mahindra sold 14% less vehicles in FY20 compared to FY19. YTD December figures stood at 1,77,074 mark in F19, whereas in the current year, they stand at 1,52,859.

In the commercial vehicle segment, Mahindra reported a degrowth of 5% in December (YOY) and 12% if we look at YTD figures. The fastest degrowing segment was that of MHCV while the ‘<3.5 T LCV’ segment registered the slowest degrowth. 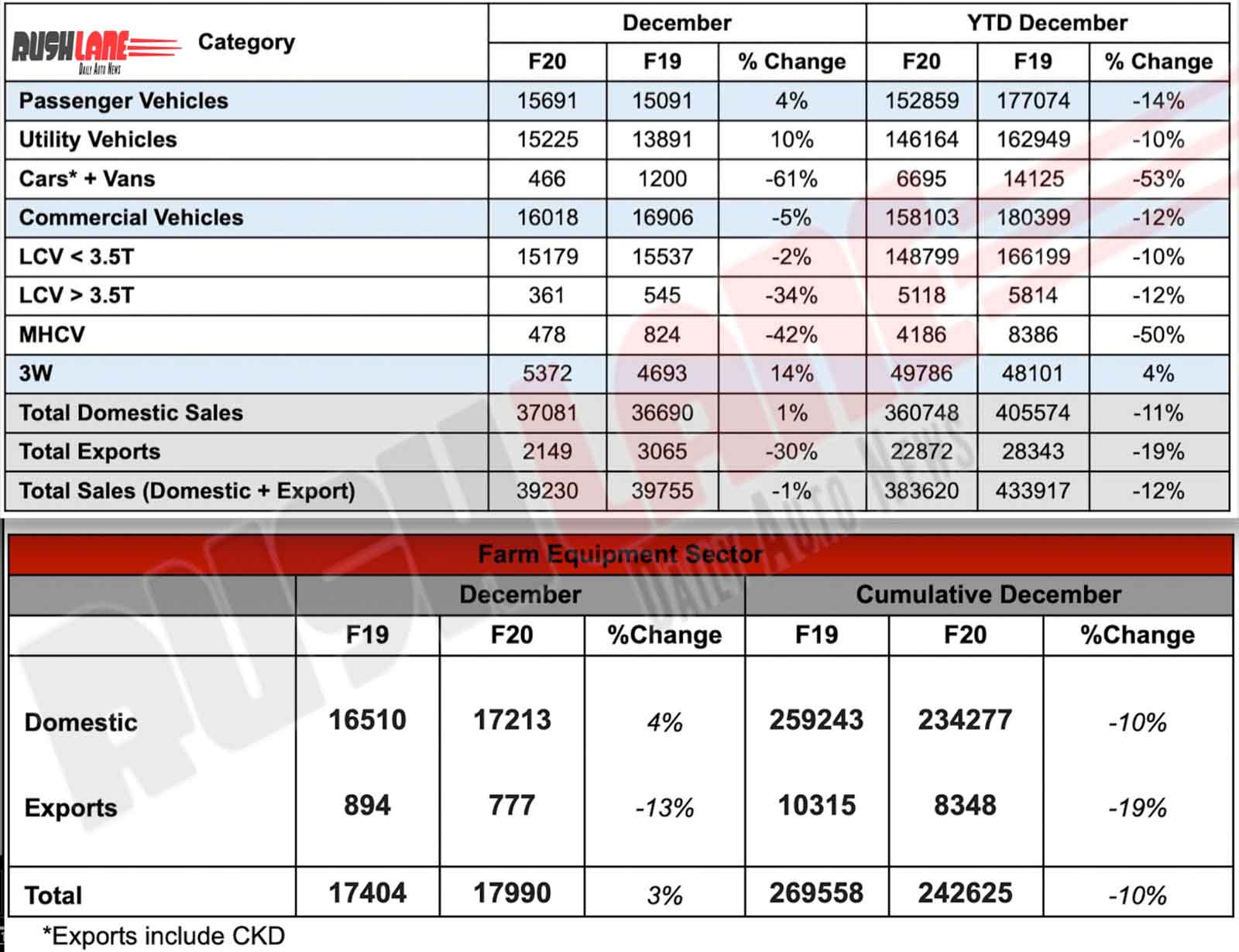 3-wheeler segment has been the only consistent performer for Mahindra this year. It registered a 14% growth on a monthly YOY – basis and over the year too, the segment has managed to deliver a modest 4% growth (YTD figures).

Exports have taken a hit, witnessing a 30% degrowth in December 2019. Total sales of the Automotive Division (Domestic + Exports) registered a 1%  degrowth (YOY) in the month of December 2019.

Mr. Veejay Ram Nakra, Chief of Sales and Marketing of Mahindra’s Automotive Division stated, “Our performance in the month of December is as per year end sales outlook and currently we are also comfortable with our overall stock levels. As we get into the new year, we are fully equipped to roll out our BSVI products and have taken all requisite measures for a smooth transition over the next three months”.

Mahindra’s Farm Equipment Sector (FES) also revealed its performance for December 2019. The sector which caters to the agricultural sector reported a 4% growth (YOY) in the domestic sector and an overall increase in sales (Domestic + Exports) by 3%. It sold 17,990 units across the world (17,213 units domestically), compared to 17,404 units last year.