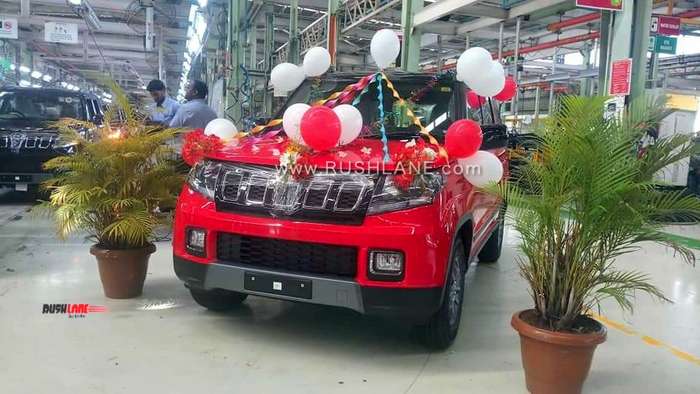 Established in 2010, Mahindra Chakan plant near Pune rolled out its one millionth vehicle. The greenfield plant which is currently undergoing phase-II expansion is operated by Mahindra Vehicle Manufacturers Ltd., a wholly owned subsidiary of Mahindra & Mahindra.

The massive factory (one of the largest greenfield projects in India) which covers 700 acres manufactures LCVs (Mahindra Maxximo was the first vehicle to roll out of this facility), passenger vehicles including Mahindra XUV500, TUV300, KUV100 and Alturas G4, as well as intermediate and heavy commercial vehicles up to 49 tonnes (GVW). The flagship Mahindra Alturas G4 premium SUV is the one millionth car to roll out of the assembly lines.

The interior has been carried out more or less untouched. The TUV300 facelift continues to offer dual-tone dashboard and beige upholstery. The updated SUV is expected to be launched in the coming days. With the advent of crossover SUVs like Maruti Vitara Brezza and Tata Nexon, the TUV300’s market share in the segment has been greatly diminished but it still enjoys some demand in rural areas.

Coming back to the Chakan factory, the company is working towards expanding the annual installed capacity to 7.5 lakh units at an investment of INR 4,500 crore. While KUV100 and TUV300 are not exactly setting the sales chart on fire, the plant is expected to be kept busy by the next generation XUV500 which is slated for launch in 2020.

As far as sustainable practices go, Mahindra Chakan plant houses 70 solar dishes to generate electricity, a comprehensive water treatment facility to achieve zero water discharge, and around 10,000 trees to maintain green cover. Last year, Mahindra announced that it will invest 500 crore in the Chakan plant to prepare it for production of electric vehicles, electric motor controllers, battery packs, and other EV-related components.