Mahindra Mojo 300 is all set to get back on sale in the country from later this month. Some dealers have already started getting delivery of demo / test ride bikes. Detailed photos of the bike too have been shared online, which reveal the feature package on offer with the 2019 Mojo ABS.

The new Mahindra Mojo 300 now gets ABS as a standard feature which has been mandated by the Government of India so as to bring about more safety on roads. This time round, Mahindra Mojo will be offered in a single variant, unlike previously, when the Mojo was offered in two trims as XT and UT.

2019 Mahindra Mojo 300 ABS retains much of its earlier styling. However, it does seen some changes with its double tube under the fuel tank now finished in gloss black as against a gold colour scheme which was seen earlier. This was also a trademark feature which was seen on all Mahindra motorcycles, even the entry level Centuro and Pantero – both of which have now been discontinued. 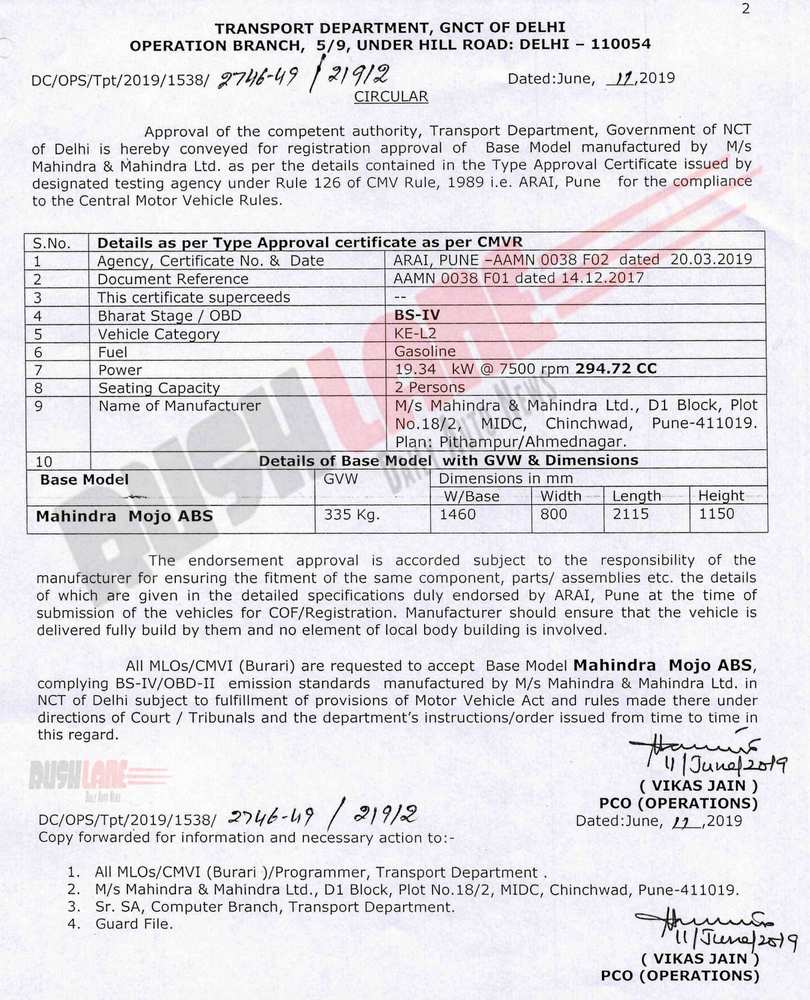 Mahindra Mojo 300 gets its power via a 294.72cc, DOHC, single cylinder, liquid cooled, fuel injected engine offering 26.30 PS peak power at 7,500 rpm and 30Nm of torque at 5,500rpm. The engine continues to be a BS4 unit, and gets mated to a 6 speed transmission. The engine is same as before, but power output has been reduced. The earlier Mojo with FI used to deliver 27.19 PS while the one with carb Mojo delivered 23.11 PS power.

2019 Mahindra Mojo 300 also does away with LED DRLs. The Upside Down forks suspension, seen on the outgoing model, gets replaced by new telescopic forks in the front with fork brace, resulting in a lighter weight and is also more cost effective. Braking comprises 320 mm and 240 mm discs with Bybre sourced calipers at the front and rear respectively.

The semi digital instrument console gets an ABS indicator as a part of the updates. Changes are also seen on the 2019 Mojo which gets Pirelli Angel CT tyres, as against previous UT and XT models which sat on MRF Nylogrip Zappers and Pirelli Diablo Rosso IIs respectively.

No prices are detailed as on date but with the ABS update, the price of the Mahindra Mojo 300 could be pushed up to or even slightly above the Rs.1.74 lakh mark. At this price range, the Mojo 300 will compete against the Bajaj Dominar 400, KTM 250 Duke, Royal Enfield Himalayan and the likes.