Mahindra Thar Old Vs New Compared Side By Side – Differences Detailed

While the old Thar had a more minimalistic approach both on the exterior and interior, the new Thar comes with a better attire 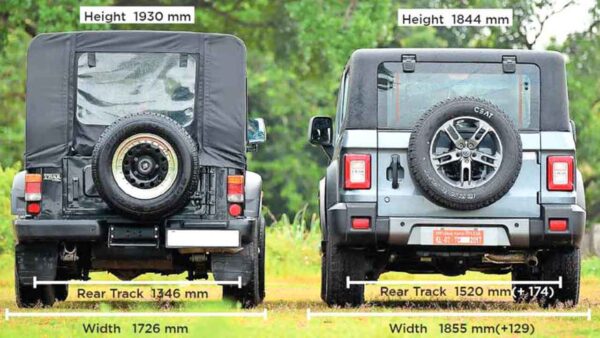 Mahindra Thar has been the blue-eyed boy of Indian off-roading segment ever since it was launched well over a decade ago. But to be honest, the first generation Thar was a barebones utility vehicle with no tech gizmos on offer. Come 2020 and the new Thar is a completely different story now.

While it is still not a feature-heavy machine like the rest of the premium modern SUVs it still has much more to offer in sense of features, practicality and comfort. So this comparison highlights what has changed in the new 2020 Thar from the old Thar. Is it still that workhorse on broken tarmacs and slushy puddles? Let us find out.

While it still retains its boxy silhouette, the new Thar certainly catches the attention better. Though its design language has certain inspirations from a Jeep workhorse it still finds its own touches which look far more sophisticated and modern than its predecessor. 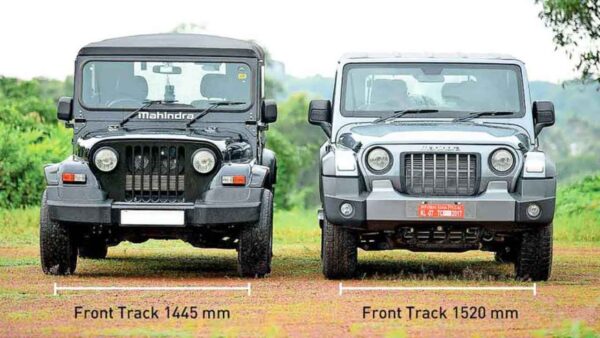 The most notable difference being its six-slat grille upfront with round headlamps and LED DRLs on side in the new Thar. It also comes with a fixed hard-top option now which was not available previously. It also gets freshly designed alloys of 18-inches for the top-spec trim whereas lower variants still get 16-inch wheels.

The new Thar has certainly grown in dimensions in most respects. It is now 65mm longer and 129mm wider than the previous model however it is 86mm shorter than the old Thar. The wheelbase has also improved by 20mm which now measures 2450mm in the new model. 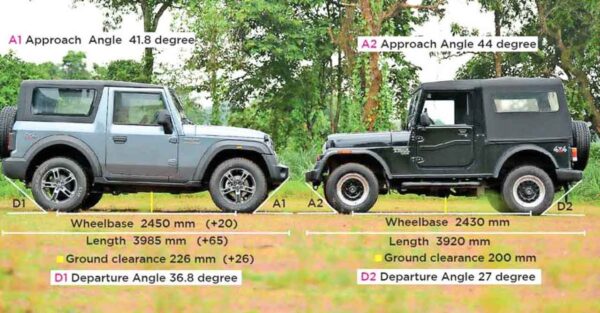 Coming to its off-roading credentials, it gets a better ramp-over angle and departure angle of 27-degree and 36.8-degree respectively and a marginally lower approach angle of 41.8-degree. The previous Thar got a break-over, departure and approach angle of 15-degree, 27-degree and 44-degree respectively. The 2020 Thar also stands at higher grounds at 226mm as opposed to 200mm in the old Thar.

Step inside the new Thar and you will notice the changes instantly. Mahindra has surely ditched its barebones design and adopted a premium interior. The new cabin has been designed not only for the weekend adventures but for everyday use as well. Overall the cabin looks very practical with much better fit and finish. The major overhaul has been the forward-facing rear seats which makes better sense as an everyday vehicle. 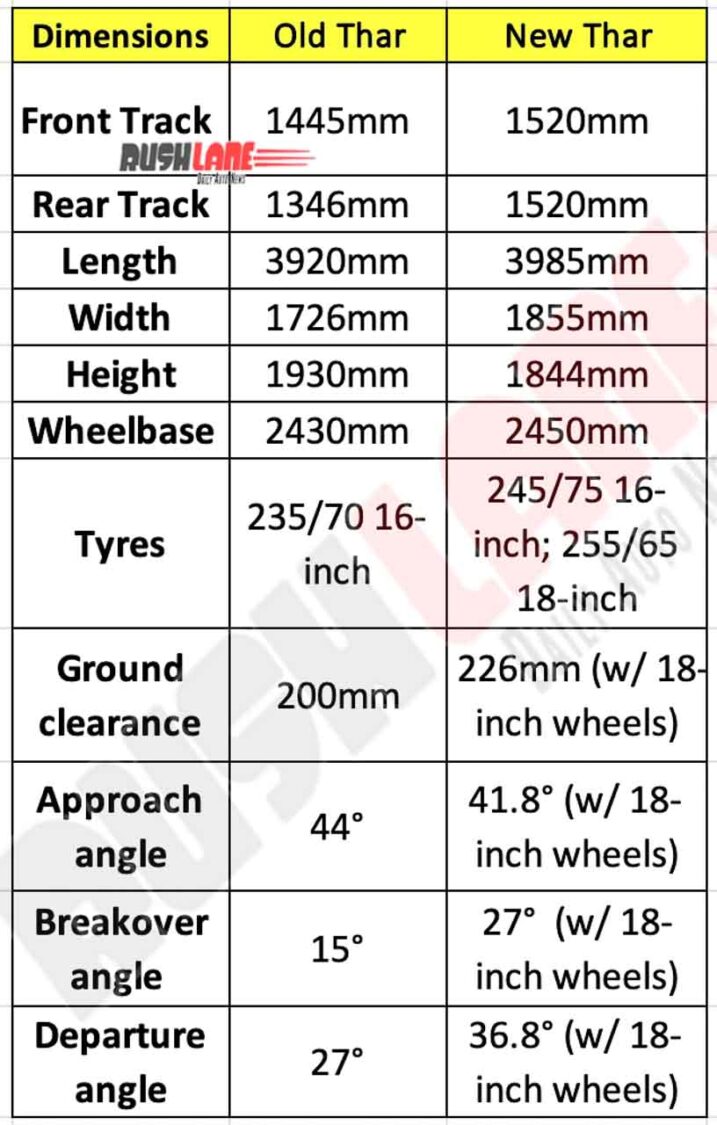 In terms of features, it is a day and night difference between the old Thar and new Thar. The first-gen Thar offered basic features such as a manual AC, an aftermarket double-din stereo system, analogue speedometer and tachometer with a small MID. The equipment list in the new Thar includes a 7-inch touchscreen infotainment system with smartphone and smartwatch connectivity, semi-digital instrument cluster, roof-mounted speakers, automatic climate control, steering mounted control, cruise control and lots more.

The old Thar was offered with a single 2.5-litre CRDe four-cylinder diesel engine which generated 105 bhp and 247 Nm of peak torque. The new-gen Thar is offered with two powertrain options- a 2.0-litre mStallion turbo petrol motor and a 2.2-litre mHawk turbo diesel engine. The former cranks out 150 bhp and 320 Nm of torque whereas the latter pushes out 130 bhp and 320 Nm of torque. Both units can be mated to either a six-speed manual or a six-speed automatic gearbox. A 4WD drive setup with a low-range transfer case is standard across the range. 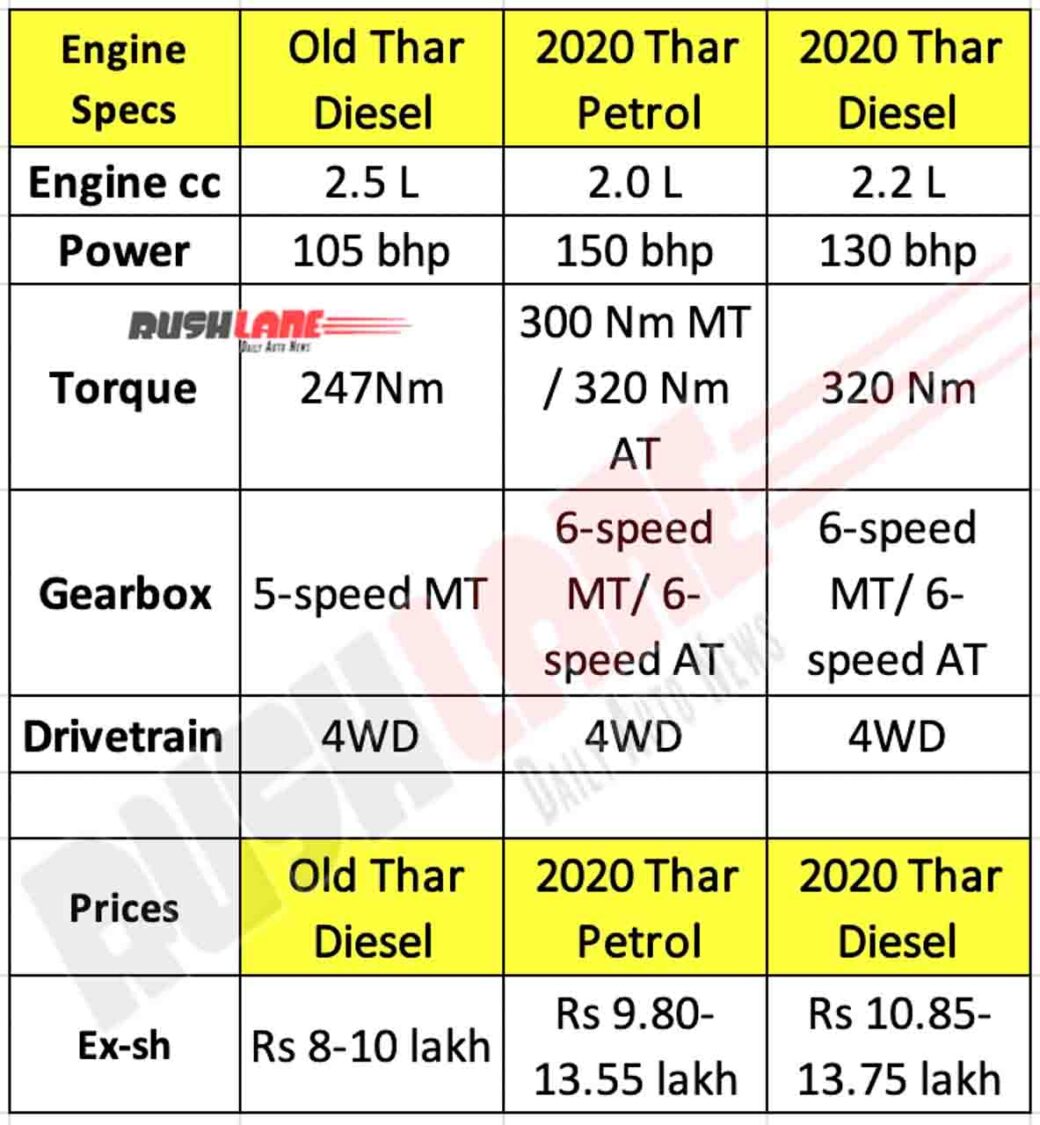 The new Thar is as competitive as the old Thar in the pricing department, however, the old Thar was offered in a solitary variant whereas the new-gen Thar is offered in three trim levels namely- AX, AX(O) and LX with different engine and gearbox combinations.