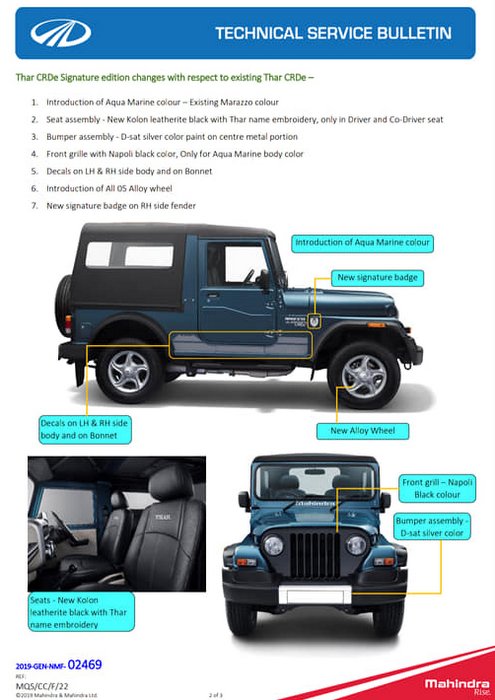 Historic landmarks aren’t easy to imitate or erase, and their endurance tells many a tale. For Mahindra Thar, it has been a long journey. A platinum jubilee, and counting. On June 3, 1949, the country got its first off road vehicle, the Mahindra CJ3A. In the company’s words, ‘Today, the Thar is the torchbearer of this rich legacy of 70 years.”

The company having been around for 70 years has seen Mahindra SUVs be an integral part of India’s story since 1949. The company takes the opportunity to celebrate 70 years of Mahindra’s off-roading heritage. In celebrating the occasion, Mahindra is ready to launch a limited in number, Mahindra Thar Signature Edition.

As the wait for Mahindra Thar Signature Edition ensues, the brand says it’s ‘A special Edition to Commemorate 70 Years of Rich Brand Heritage… Only 700 nos will be Built.’ As of last update, the vehicle is ‘arriving soon’. 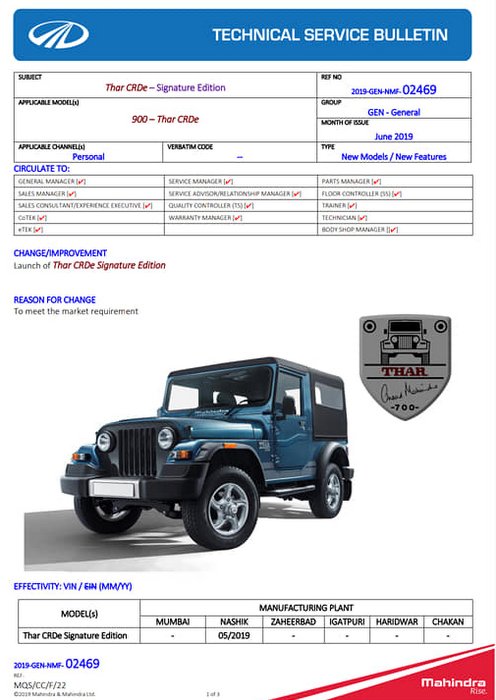 Manufactured at the Nashik plant, Mahindra Thar (CRDe) signature Edition is available in Aqua marine colour, seen on Marazzo. Front seats are outfitted in kolon leatherite black with Thar stitched onto the seats. The bumper assembly is jazzed up with D-sat silver paint on the centre metal bit. The front grille is in Napoli black. All 05 alloy wheels are pressed into duty and the signature badge is visible on the RH side fendor (front). Special decals feature on the Thar body.

In the years that Mahindra has been operational in India, the company has always strived to uphold its SUV and off-roading reputation. So much so, that the brand has stayed away from other passenger car segments in being true to its SUV commitment.

Mahindra Logan was an exception, an outcome of the Mahindra-Renault JV. Mahindra carried the Logan forward, and later rebadged it as the Verito. Soon the company also launched a compact version, the Verito Vibe. The newest rendition of the vehicle is the e-Verito, a fitting example of the manufacturer’s focus on the future of electric mobility. As for the Verito and Vibe, both strugglers in a competitive sales market, the company would look at axing them as it shifts its product portfolio to the BSVI lifecycle.

With the future being lean and clean, the new Mahindra Thar on test is likely to break cover later in 2019, or as late as 2020 Auto Expo, and but obviously will be BSVI compliant. In addition, new safety regulations come into effect on July 1, 2019 and this mandates the following standard features in cars – driver-side airbag, speed warning system, seatbelt reminder for driver and co-driver, and rear parking sensors. Later i the year (October 2019), vehicles will also need to conform with crash test compliancy.