Mahindra Electric, the electric vehicle division of Mahindra Group, has launched the new Treo electric three wheeler rickshaw in India today. Two variants have been launched – 3 seater and 5 seater. The former is priced at Rs 1.36 lakhs, the latter is Rs 2.22 lakhs. Prices are ex-showroom. Prices include FAME subsidy. Both are produced at company plant in Bangalore. It launch follows the e-Alfa electric auto rickshaw launched in India last year by Mahindra.

Both these electric rickshaws will serve as last mile connectivity options in larger cities. Mahindra Treo was showcased earlier this year at the 2018 Auto Expo and was also displayed at the Move Summit 2018 in New Delhi. 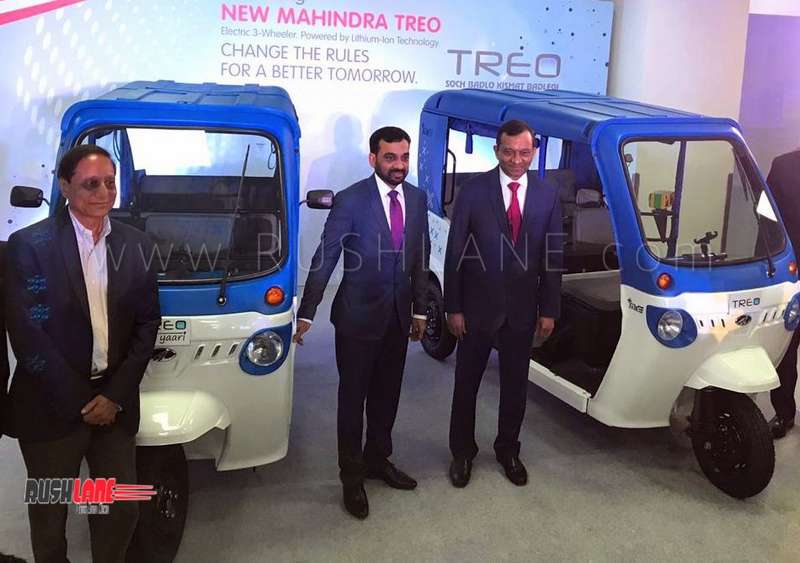 Mahindra Treo and Treo Yaari are offered in three and four seater variants. Both Treo electric three wheeler is presented in hard top and soft top. All four variants offer Telematics technology which enhances connected features to monitor range and charging status. The Treo electric vehicles use the latest lithium-ion battery technology which is more durable, lasts longer and present low maintenance options as compared to other similar batteries.

The IP 67 rated battery box offers better battery safety while an inbuilt rear crash guard protects passengers in the event of a crash. These features give the owners and drivers a chance to enhance earning potential by 20-25%. Mahindra claims that Treo has operating cost of Rs 0.50 per km. 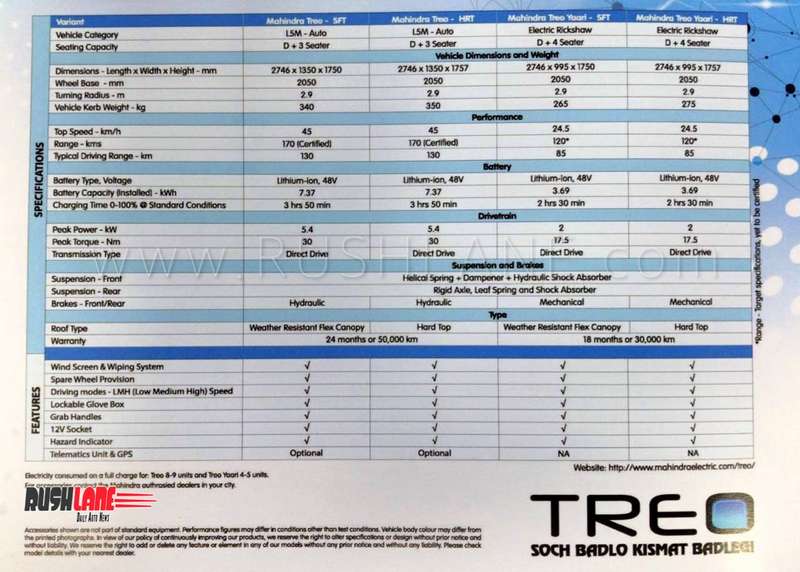 Mahindra Treo comes in a distinctive shade of blue. It offers enhanced comfort levels for passengers with better ingress and egress. The Treo measures 2,746mm in length, 1,350mm in widht and 1,750mm in height, while wheelbase measures 2,050mm. It gets turning radius of  2.9m and kerb weight of 340 kgs. Its space frame architecture with corrosion free SMC panels presents a dent free body and easy repair or replacement.

Mahindra Treo gets its battery pack positioned above the rear axle and gets fatter 12” tyres as compared to those seen on the e-Alfa Mini. Tyres present better maneuverability on India road conditions while clutchless drive technology allows for a quieter a vibration free ride. It is seen with a hydraulic brake set up allowing for a top speed of 45 kmph. Charging time is 3 hours and 50 minutes to offer a range of 110 kms on a single charge. The Mahindra Treo also comes in with a feature to swap batteries once they are fully discharged.

Production capacity is 1,000 units a month. It is only on sale in Karnataka as of now. More cities and states will be added soon. The Mahindra Treo complies with Government of India’s new electrification policy and will rival the Bajaj e-rickshaw upon launch in the country.