First launched in 2015, sales were impressive for the first few months. But with the launch of soft-roaders like Maruti Brezza and Tata Nexon, sales of the TUV300 started to decline. Sales average these months is about 2,000 units, whereas Nexon is at 4,000 units and Maruti Brezza is at 14,000. To boost sales back, Mahindra will launch updated TUV300 SUV in India next year.

Ahead of that, the car has been spied on test for the first time. Mahindra TUV300 is rugged and tough. It is built for off-roading more than for city driving and is a sub four meter compact SUV with a ladder on frame platform and rear wheel drive setup. 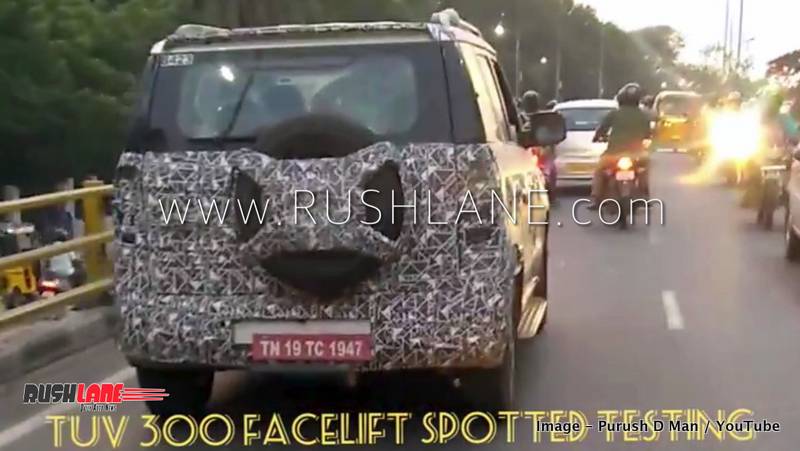 Regaled for its tough stance and modern styling, the Mahindra TUV300 is currently offered in 9 variants. It borrows inspiration from a battle tank and owes its designing to Italian design house Pininfarina. The facelift TUV300 gets a five slat grille with chrome surrounds, angular headlamps with new LEDs, square fog lamps, black painted B pillars and new alloy wheels. The rear end resembles the Quanto. It gets a tail gate mounted rear wheel, vertically stacked tail lamps and blackened treatment to rear windshield thus creating a two tone effect.

Interiors of Mahindra TUV300, done up in black and beige are spacious and the 7 seater is comfortable with two jump seats at the rear which are large enough for two children. It gets a 384 liter boot and features among which are rear parking assist, steering mounted audio controls, climate control, ABS, EBD, driver side airbags and top three variants receive dual airbags in the front.

Engine specifications on the 2019 Mahindra TUV300 facelift will be same. This is a 1.5 liter mHawk, three cylinder, turbocharged, diesel engine. This engine is capable of 100 bhp power and 240 Nm torque sending power to rear wheels via a 5 speed manual or 5 speed AMT transmission. ARAI certifications put fuel efficiency at 18.49 kmpl.

Currently, the car is offered in striking exterior color options of bold black, molten orange, majestic silver, dynamo red, verve blue and glacier white – expect some new colours to be on offer with the facelift. Mahindra TUV300 competes with the likes of Brezza and Nexon. It also competes with Maruti Ertiga, Honda Mobilio, thanks to the 7 seat layout.