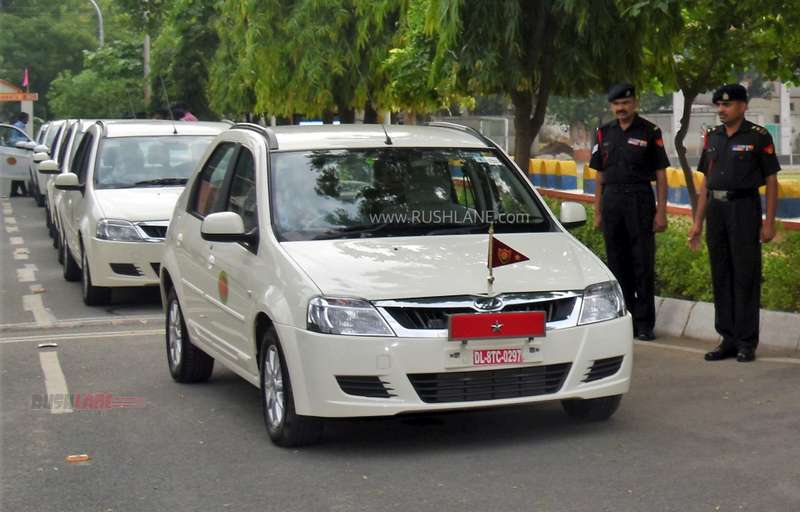 As can be seen in the photo, it is the fleet of Mahindra Verito electric, or the eVerito, which is being flagged off by Quarter Master General, Lt Gen Gopal R. The launch of this pilot project is done under partnership with Energy Efficiency Services Ltd (EESL), a joint venture of Central PSUs under Ministry of Power and is in tune with Government of India policies towards environment protection.

The first batch of electric cars, made by Mahindra (Verito EV) and Tata Motors (Tigor EV), will be used as a pilot project with more EVs to be introduced at a later stage. The use of these vehicles will go a long way in ensuring both economy and efficiency while it will also help to reduce emission levels in the Capital to a significant extent.

Air pollution is a leading issue especially in New Delhi. The Government is trying its best to reduce the carbon emission footprint and auto majors such as Tata and Mahindra are in the lead where R&D and manufacture of electric vehicles are concerned. EESL is also facilitating use of these vehicles by Government agencies.

Recently, the Central Government has been aggressively promoting the use of electric vehicles. The Goods and Services Tax Council has also cut rates on EVs from 12 percent to 5 percent which would lower prices of EVs between Rs.50,000-Rs.1.5 lakhs.

In the Union Budget, the NDA Government also announced a tax rebate upto Rs.1.5 lakhs to customers on interest paid on loans to purchase such electric vehicles with exemption benefit of Rs.2.5 lakhs over the entire loan repayment period.

As a part of the national e-mobility program, the Government of India targets saving of over 50 million liters of fuel per annum which will in turn bring down 5,69,000 tonnes of CO2 emissions. It is also expected that there will be a reduction in mobility bill as the estimated per km cost for an electric car is projected at 0.85 paise as against Rs.6.5 for normal cars.