Mahindra and Mahindra, leading SUV makers in the country, are all set to introduce their latest offering. The XUV300 is the third sub 4 meter SUV being introduced by the company following the KUV100, TUV300 and NuvoSport.

Unlike others, the new SUV is from the cheetah inspired XUV family. Which means, it is built on the monocoque chassis. Mahindra XUV300 shares its design and styling cues with the XUV500.

Mahindra XUV300 will launch in India on 15th February 2019. It has already open for bookings at company showrooms as well as online. The new XUV300 is presented in three variants of W4, W6 and W8 and 1 optional pack W8 (O). It will get both petrol and diesel engine options. Prices have not been announced but are confirmed officially to range between Rs.8-12 lakhs.

Positioned on the same platform as the SsangYong Tivoli, the new Mahindra XUV300 is seen with projector headlamps, boomerang shaped LED DRLs, LED tail lamps and massive wheel arches fitted with 17” diamond cut alloy wheels. It will also get a sunroof with roof rails, roof mounted spoiler and rear washer/wiper. 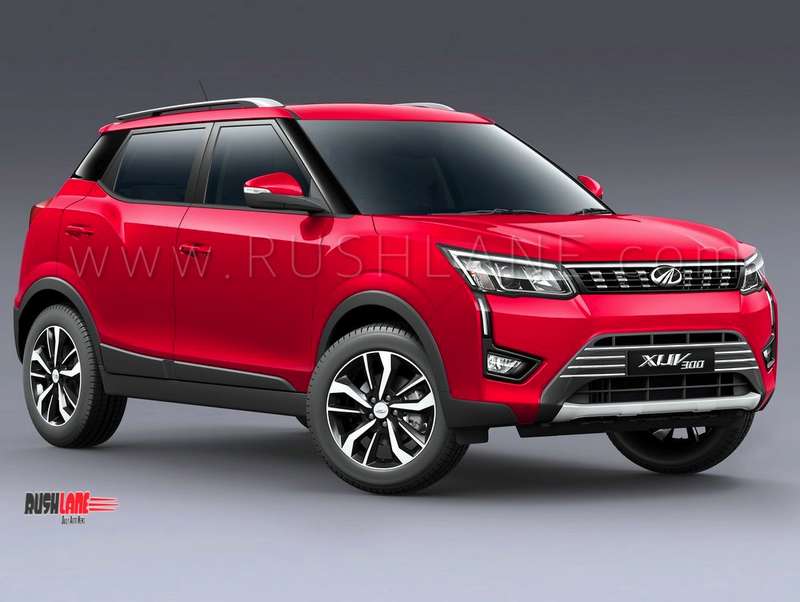 The cabin is done up in a beige and black color scheme. It gets a well equipped dashboard with touchscreen infotainment system with Android Auto and Apple Carplay. Its longer wheelbase relates to added cabin space and easier ingress and egress along with ample leg room both for front and rear passengers. Among its safety features are parking camera, 7 airbags, parking sensors, dual zone automatic climate control AC, ABS with EBD and disc brakes on all four wheels. It also receives all four power windows.

Mahindra XUV300 gets its power via a 1.2 liter petrol engine offering 200 Nm torque while the 1.5 liter diesel engine delivers 300 Nm torque. No power figures have been revealed as on date but both engines get mated to a 6 speed manual transmission. Expect them to deliver about 125 hp power. The new XUV300 will compete against the Maruti Brezza, Tata Nexon and Honda WRV in the sub compact SUV segment.