Mahindra XUV400 spied for the first time – Smaller than XUV500

Launched earlier this year, Mahindra XUV300 has been a sales success. It is due to the launch of XUV300, Mahindra has managed to register comparatively lower decline in sales, against industry standards.

Mahindra XUV300, which was launched earlier this year, was codenamed S201. There are multiple variants of XUV300 that are in the making. One of them is an all electric variant, codenamed S210. Another is a 7 seater variant. This is the first time that the S204, or the Mahindra XUV400 has been spotted on test. Images are credit to Car and Bike / NDTV Auto.

Thanks to the success of 5 seater XUV300, Mahindra has started work on their 7 seater variant of the XUV300. Codenamed S204, the new SUV has now been spied on test. Reported to be named Mahindra XUV400, it is based on the same platform as that of the XUV300. But it will be longer than XUV300, as it will be a 7 seater. 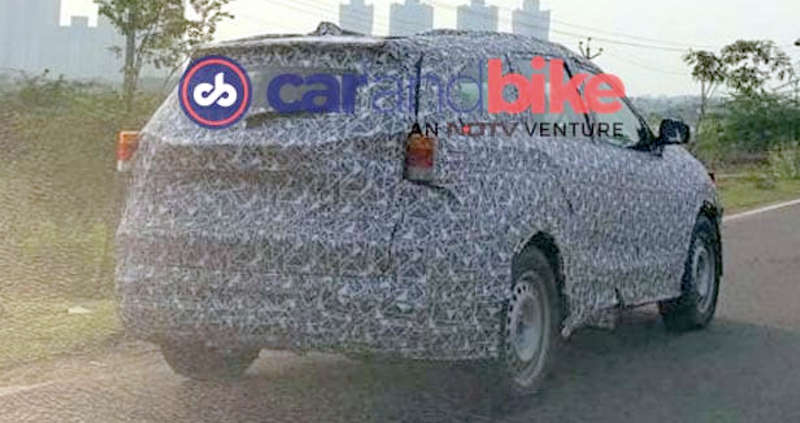 2020 Mahindra XUV400 will not only share platform, but will also be sharing engine and parts with XUV300. This will allow Mahindra to price the 7 seater XUV400 affordably. It will have design inputs from Mahindra owned design house, Pininfarina.

On the inside, there will be three rows, which will offer seating to 7. Known to offer best in class space, Mahindra will most likely offer XUV400 with best in class space as well. Features on offer on the inside could include touchscreen infotainment system, voice assist, internet connectivity, height adjustable driver seats, headrests for all seats, rear AC vents, etc.

Mahindra XUV400 could be based on the SsangYong XLV, which is Tivoli’s 7 seater variant. For those not aware, XUV300 is largely based on SsangYong Tivoli. Powering the Mahindra XUV400 will be petrol and diesel engine options. These could be same as the one’s we have seen on the XUV300 – which are 1.2 liter petrol and 1.5 liter diesel. These will be upgraded to BS6 standard.

Launch price of Mahindra XUV400 will be such that it will sit in between the XUV300 and the XUV500. It will take on the likes of Hyundai Creta, which is expected to launch as a 7 seater next year.