Owning a premium motorcycle is something every young boy would dream off. What does one do if money is short but dreams know no bounds? Designing a motorcycle from an old vehicle could be the answer.

This is exactly what two youths from a small village called Gehlran in Bhogpur, Jalandhar did. They got hold of a Maruti Suzuki 800 alongside some old motorcycle parts and converted it into a large cruiser; all in a matter of 45 days and at a cost of roughly Rs 2 lakh.

Davinder Singh (20) and Harsimran Singh (18) are college students. While Davinder studies at St Soldier’s Group of Institutions in Jalandhar, Harsimran is doing B-Tech Aeronautical Engineering at Desh Bhagat University, Mandi Gobindgarh. The two have been friends for a long time and have always harboured a dream to own a ‘big bike’.

Davinder had plans to purchase a Harley-Davidson but put them on hold due to personal reasons. But it appears that the lockdown had turned into a boon for the two to reach the decision to make their own motorcycle, with a car engine!

The journey from Maruti 800 to ‘Dracula’ cruiser

The youngsters took the old Maruti 800, fixed the design, manufacturing process and materials required, well in advance and commenced work on 1 July 2020. To conduct this makeover, they rented a local workshop for Rs 35,000 per month. They spent days and nights there. Finally, the project was finished on August 8. 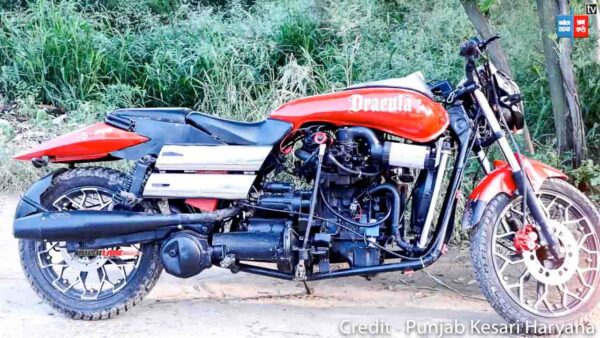 Dubbed ‘Dracula S-800’, the cruiser certainly looks interesting for a ‘student project’. To assist the Maruti 800 engine, a radiator and cooling fan were borrowed from a Tata Ace. Other key internals were sourced from various Maruti Suzuki cars and a used Mahindra Bolero. A Bajaj Pulsar served as the base chassis. Observe closely and one can also see components from the Royal Enfield Classic 350, Yamaha FZ and even a KTM 200 Duke (rear mudguard).

On paper, the Dracula S-800 can touch speeds close to 200km/h due to the relatively light construction for a 796cc three-cylinder petrol engine. In final BS4 format, the Maruti 800 made 37bhp and 59Nm of torque while mated to a 4-speed transmission (47bhp and 62Nm with 5-speed). We cannot expect the same output characteristics in this.

Fuel economy is claimed to be around 20km/h. This is the usual standard for premium multi-cylinder motorcycles from mainstream brands. Though the Dracula S-800 is ready, it cannot be easily registered for road use, especially at a time when authorities are against car or bike modifications. However, Davinder and Harsimran’s effort deserves praise.