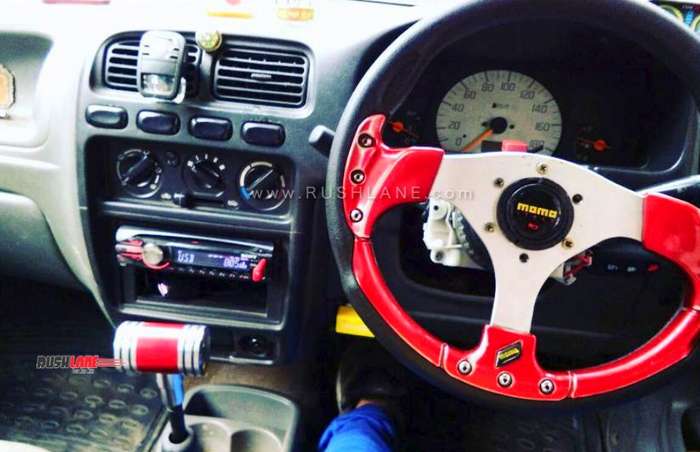 It is not quite often that we come across a modified Maruti Alto 800. The small car has been the primary choice of aspiring Indian middle class for decades but owing to its puny 800 cc three-cylinder petrol engine, it is not exactly a tuner’s delight. However, someone has spent Rs 3.5 lakhs (more than the cost of a new Alto 800) to make the little hatchback go faster.

The project has been executed by Kolkata-based SA Designs which is run by Sriniketh Acharya. With a claimed top-speed of 200 kmph, this is arguably the fastest Maruti Alto in the country. The cosmetic modification, though immediately noticeable, is not over the top.

The visual enhancements includes blacked out headlamps with projector elements, LED foglights on bumper, blacked out taillights, roof-mounted spoiler and twin black racing stripes. The modifier has opted not to embellish the car further by adding skirts but twin exhaust pipes hint at performance modifications.

On the inside, the modified Maruti Alto 800 sports Momo sports steering wheel, new gear knob and pedal covers, a Sony audio system with 12-inch 3, 800 watt sub-woofer, and a type-R tachometer. Rest of the car appears to be left untouched. Given that the performance enhancement is quite significant, it is imperative that the chassis is beefed up and the braking system is upgraded.

While extracting so much performance from such a small engine is an impressive feat, we can’t help but wonder if the Maruti Alto can handle the enhanced engine outputs without compromising on safety. It is to be noted that the Alto’s hardware in its current configuration will not be able to clear the upcoming crash test norms.

Maruti Suzuki is working on an all-new Alto which will feature a modern lightweight platform that will comply with the new Indian safety regulations. The new model is expected to make its world premiere by October 2019.