Being one of the most affordable car on offer in the country, has played a vital role in the sales success that is Maruti Alto. But in addition to that, the value for money proposition it offers, has also played in its favour. Below is a brief history of Maruti Alto and its journey in Indian auto industry.

Immediately following its launch in September 2000, the Maruti Suzuki Alto went on to become the bestselling car in 2004. By the year 2008, there were a total of 10 lakh Alto cars sold. In 2010, the company launched the Alto CNG which also found favour among buyers in the country. Sales touched the 20 lakh mark in 2012 and the 30 lakh mark in 2016. In 2019, the Maruti Suzuki Alto became BS6 compliant. 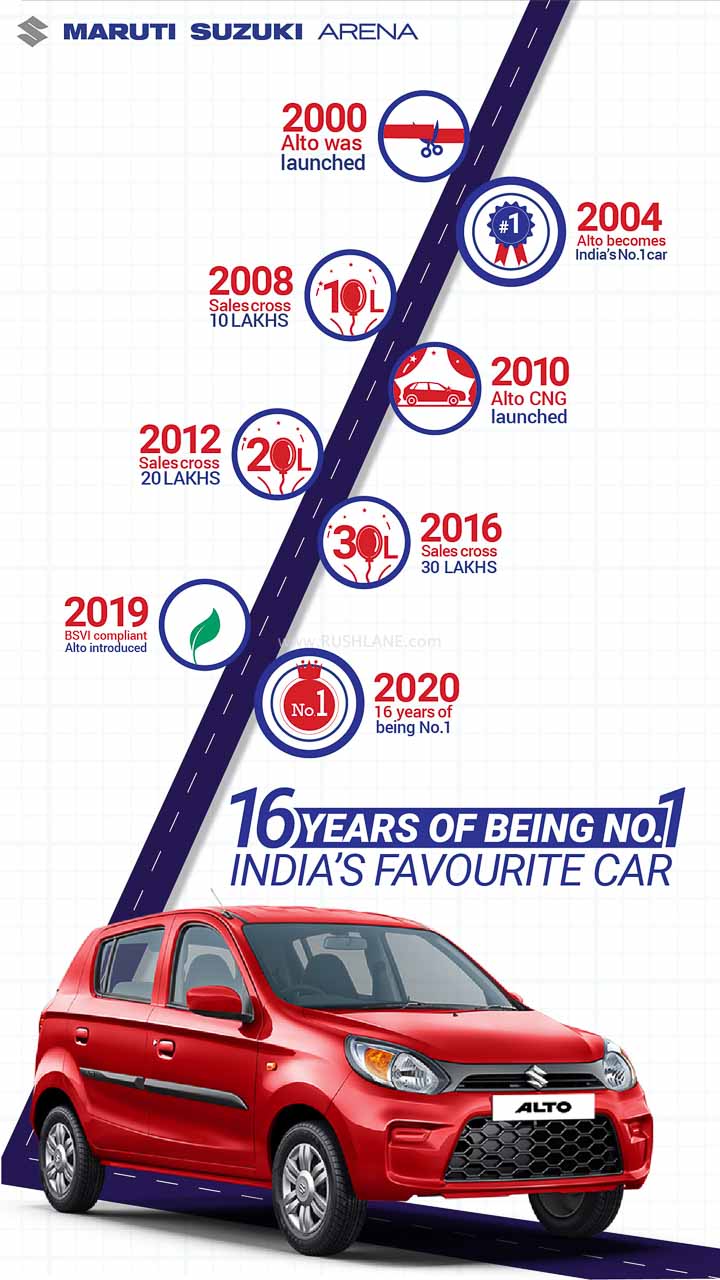 When assessing sales, it was found that the Alto is generally the first choice of first time car buyers in the country with around 76 percent of customers opting for this model as their first car. The company has continually updated the Alto in accordance with customer preferences and it was the first car in the company lineup to be made to comply with the stricter BS6 emission norms.

Apart from being affordable, fuel efficiency at 22.05 kmpl in petrol format and 31.56 kmpl with CNG, is what makes it a viable option for buyers. Alto 800 has also been updated in recent years to meet the new safety norms, among which are dual airbags, reverse parking sensors, ABS, EBD and high speed and seat belt alert systems. Alto K10 is no longer on sale in BS6 era.

Newly launched Maruti Suzuki 800 S-CNG is the most affordable CNG car in India. It gets its power via a 796cc engine and a CNG cylinder with 60 liters water equivalent filling capacity. The engine offers 47 bhp peak power and 69 Nm torque when used exclusively on petrol fuel while in CNG it goes down to 40 bhp and 60 Nm. The engine is mated to a 5 speed manual transmission.

Maruti Suzuki claims that the factory fitted CNG kit is leak poof and gets two independent engine control units and intelligent fuel injection system. It also receives automatic fuel changeover switch allowing the car to directly start on CNG. This is a unique feature as most other CNG powered vehicles start off on petrol and then switch over to CNG. However, Maruti Suzuki claims that CNG mode should only be used to start car engine, when there is no petrol in tank.