Almost every segment in which Maruti Suzuki India sells cars, has registered a decline in sales. The mini segment which comprises of Alto, Old WagonR – registered sales of 22,766 units – declining almost 40%. 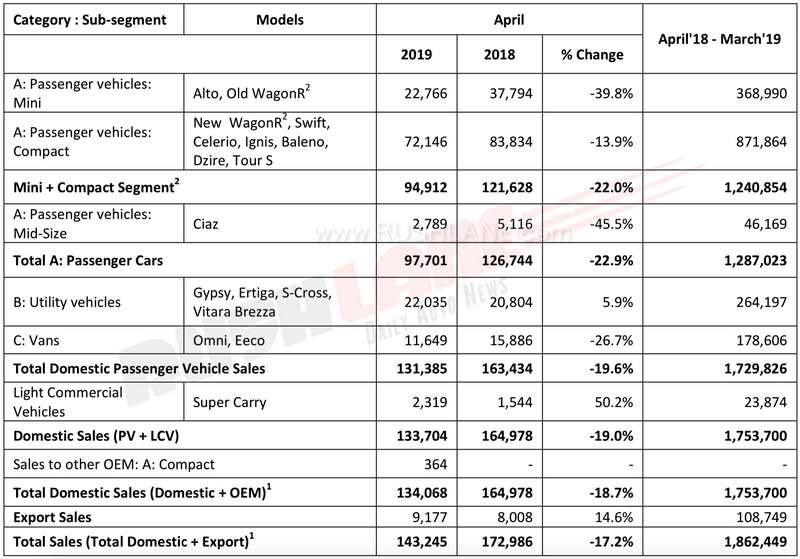 New Ciaz sales too have registered a massive decline, this in spite of the fact that Maruti launched their new 1.5 liter petrol as well as new 1.5 liter diesel engine with Ciaz in the past few months. Ciaz sales stood at 2,789 units, declining by 45.5%.

Due to discontinuation of Omni, sales in the Vans segment have also declined. In this segment Maruti sold 11,649 units, declining 26.7%. The only passenger car segment which delivered positive growth for Maruti in April 2019, was the utility vehicles segment, in which the company sells Gypsy (discontinued), Ertiga, S-Cross, Vitara Brezza. Sales in this segment grew by about 6% to 22,035 units.

Maruti share price is trading about 2.54% lower today, at about 6,658. This is about 700 points in less than 1 week. Apart from decline in sales, the other reason for share price to decline is most likely due to their announcement last week, where they said that they will no longer produce diesel cars by April 2020. Diesel cars accounted for 23% of Maruti’s total sales in 2018.

Maruti now looks forward to the launch of new generation Alto, which is based on Heartect platform. It has started road test, and has been spied on a couple of occasions. It will replace the current Alto, and comes with SUVish styling. It is also bigger and safer than current Alto, as it will meet upcoming Bharat NCAP safety norms. Engine will be same 800 cc in BS6 compliant form.