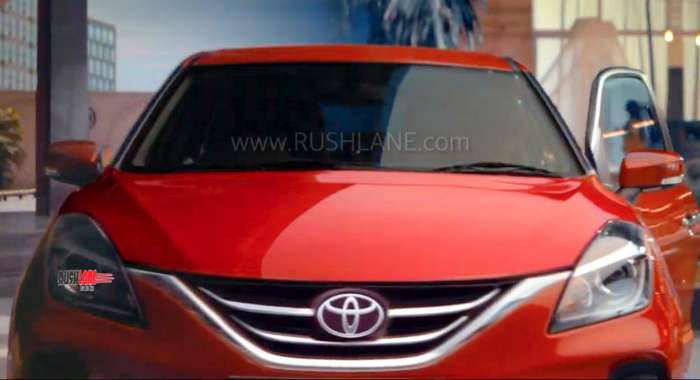 Just a few days back Toyota Glanza was spotted in Goa, while it was on a TVC shoot. That TVC is yet to be released, but ahead of that, Toyota India has started sharing short teaser videos, just ahead of the launch of their Maruti Baleno version, called Glanza.

The latest teaser video reveals the front of the car for the first time, officially. Leaked photos had already confirmed the same some days ago. As seen in the leaked photos, there is nothing new in Toyota Glanza, when compared to Maruti Baleno, except for the front grille.

Toyota is even using a similar marketing strategy which was used by Maruti Suzuki India. When Baleno was first launched, it was shown as a car for the young generation, who would like to use the car for work as well as party. Similar theme is shown in the Toyota Glanza teaser, which can be seen below.

Toyota Glanza ads will soon be showcased on all platforms. From shopping malls to TV screens and from roadside hoardings to internet, Toyota will market the Glanza as a new premium hatchback for the new gen buyers. Dealers have been shown the marketing plan, while sales team is currently getting trained.

The biggest question sales person of Toyota Glanza might face is that why one should go for a car which is basically a Maruti Baleno. Sales person have been told to explain here that brand Toyota stands for reliability, quality, etc.

Compared to Maruti Baleno, Glanza will come with 3 year / 1 lakh kms warranty, which is more than what is offered by Maruti Baleno. Apart from that, there is no noticeable change. Even the features list, engine options are same.

Toyota Glanza will be offered with Maruti’s new 1.2 liter BS6 petrol engine which is rated to deliver 83 PS and 113 Nm. Transmission options include CVT as well as 5 speed MT. Expect the Toyota Glanza to be about Rs 30-50k more expensive than the Baleno.