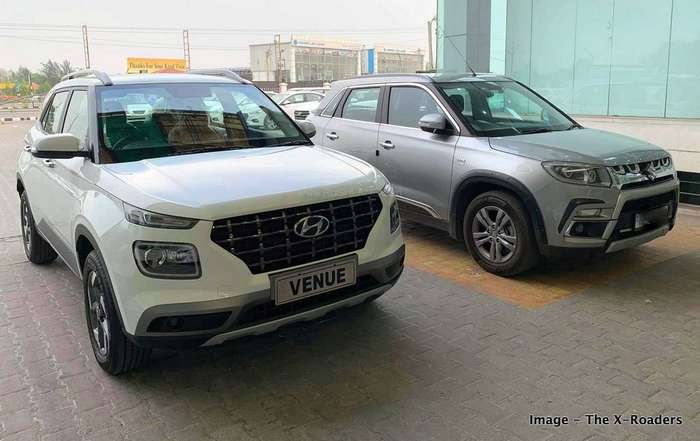 If at all there is an automaker who can give Maruti Suzuki a run for its money in India, it is Hyundai. The South Korean automaker has firmly established itself in the second spot, thanks in no small measure to its good understanding of the Indian customers. Hyundai seems to have a winner in the new launched Venue, the Maruti Vitara Brezza challenger.

Launched in 2016, the Vitara Brezza wasted no time in ending the Ford EcoSport’s unchallenged run. In the last three years, the sub-4 crossover segment expanded with the arrival of Tata Nexon and more recently, the Mahindra XUV300. However, none could dethrone, or for that matter, even come near the Brezza in terms of monthly sales.

In its debut month, the Venue clocked 7,049 units which is extremely impressive given that it has only been in the market for a little over a week. And for the first time ever, the segment leader Vitara Brezza felt the pinch by a rival as it reported a massive YoY decline of 44% in the month of May 2019 at 8,781 units. This is the highest YoY monthly decline Brezza has registered ever. The last time Brezza registered sales lower than 8,781 units, was two years ago, back in June 2017.

Can the Venue take over the segment leadership from Brezza in its first full month of sales? Perhaps, but it would take a few more months before we know if the South Korean product can sustain the initial euphoria.

Meanwhile, the second newest product in this hotly contested segment, the XUV300, has managed to seal the final position on the podium by breaching the 5K mark for the first time (5,113 units). The Nexon registered sales of 4,506 units last month which is marginally higher than what it managed in May 2018.

The Vitara Brezza is not the only crossover to face the heat from the Venue. The Ford EcoSport, oldest of the lot, saw its sales drop by 28% to 3,604 units. Ford has just introduced a new EcoSport Thunder high-end variant and made its Titanium+ variant considerable cheaper in an attempt to keep pace with its newer rivals. The Mahindra TUV300 and Honda WR-V more or less belong to the also-ran brigade.

It would be interesting to see how the fierce battle between Maruti and Hyundai in an important segment pans out.