Taking only utility vehicles into account, a dip of 3.57 percent was noted with 82,772 units sold in January 2019 as compared to 85,840 units same month a year ago. This dip in sales could be attributed to liquidity crunch, low buyer sentiments and in view of upcoming safety standards set to come into effect later this year.

Maruti Brezza and Hyundai Creta once again claimed top spot on the list of leading 5 best selling utility vehicles in January 2019. It was these two UVs that were also at No. 1 and No 2 position respectively in January 2018. The list also includes Mahindra Bolero, Maruti Suzuki Ertiga and Toyota Innova Crysta in 2019. Brezza sales have surpassed the 4 lakh unit sales mark, reaching this milestone in just 35 months since launch in March 2016. This UV commands a market share of 28.34 percent as on date.

In January 2019, a total of 13,172 units of the Maruti Brezza were sold as against sales of 11,785 units in January 2018. This put the SUV in a No. 1 position followed by the Hyundai Creta of which 10,314 units were sold last month as compared to 9,284 units sold in January 2018. The Hyundai Creta sees increased features with a new range topping SX Executive variant launched. These additions are to counter upcoming competition from the recently launched Tata Harrier and new Nissan Kicks. 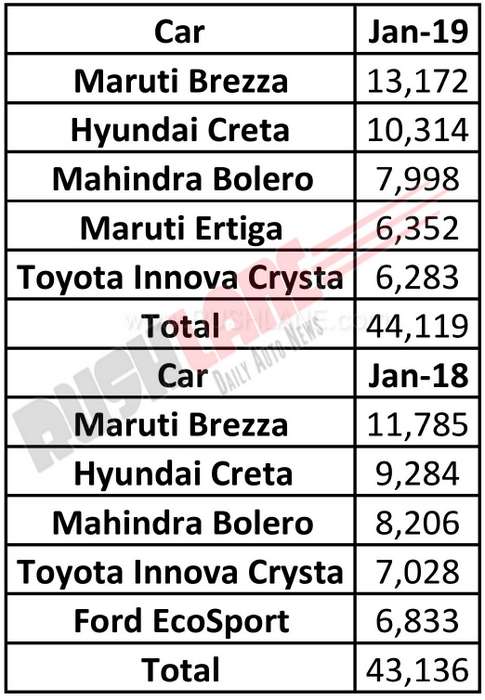