RUSHLANEDAILY AUTO NEWS
HomeCar NewsMaruti car being driven with a man on its roof in UP...

Road rage has different ways of manifesting itself in real time, and here’s one such scary AF incident which was recorded in Ghaziabad, Uttar Pradesh. Multiple footage of the incident came from onlookers who witnessed the incident and tried to intervene.

35-year-old Rajesh Diwan, a resident of Pitampura, Delhi found himself precariously perched atop a Maruti Zen Estilo, clinging on for dear life over a distance of 6 kms. The entire incident was recorded on video. 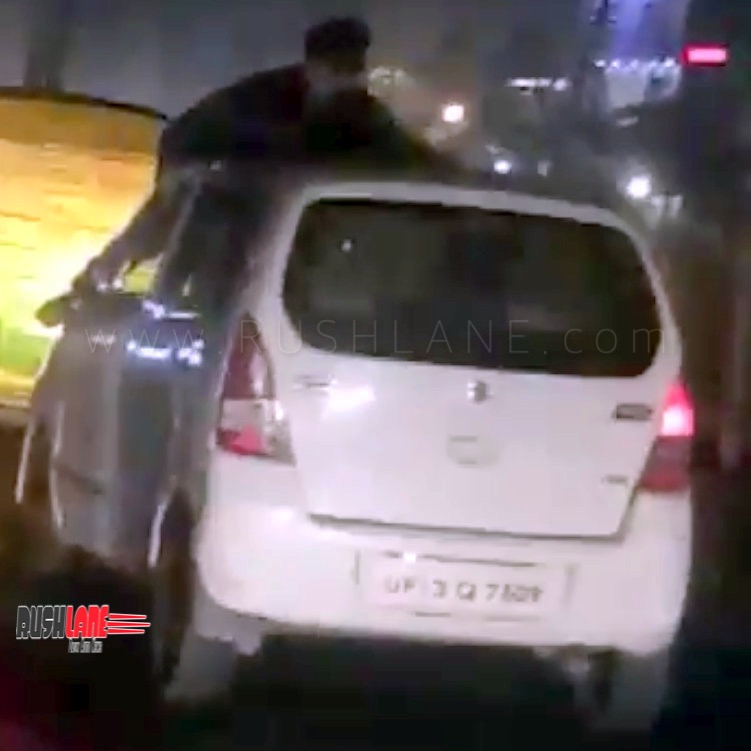 On Thursday, at about 7 pm, Rajesh was at Ghaziabad to meet a friend. While waiting at a traffic signal in Sahibabad, his Maruti Swift Dzire was banged at the rear. The other driver in a Maruti Zen Estilo began reversing to take off. Rajesh exited his car to confront the errant driver but he took off. Rajesh gave chase and was able to catch up, and overtake the other driver near Raj Nagar Extension.

He tried standing in front of the Maruti Zen Estilo to get the driver to stop and face him. 30 year old Bhuwan Kumar Sharma, a legal practitioner, was in no mood to stop, and instead, accelerated his car, and in effect attempt to mow Rajesh down, who then climbed the Estilo’a bonnet but that didn’t stop the driver.

In order to be as safe as possible in the situation, Rajesh climbed on to the roof and spread his arms to get a grip of the car’s sides. The driver continued at speeds of 80 kmph and above on vacant roads in the area. Rajesh held on for life and began shouting to gain attention of the errant driver and onlookers.

Police said the car slowed near Meerut crossing because of a traffic jam. Onlookers pulled Sharma out of the car, beat him and handed him over to the coppers. Upon approaching local police, Rajesh was directed to Sahibabad police station since the incident had started there. An FIR was registered at 12.44 am on November 9.

Dinesh Yadav, station house officer, Sahibabad police station, said “The accused has been booked under IPC sections for attempt to murder, rash driving on public way, causing damage and causing hurt by act endangering life or personal safety of others.”