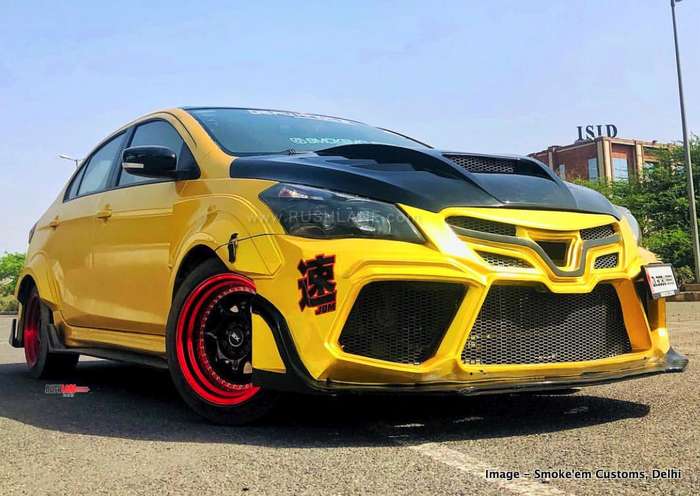 It is not everyday you come across an extensively modified Maruti Ciaz because majority of the sedan’s customer base buy it for the value and space it offers. So, a Ciaz that has gone under the knife automatically becomes exclusive even if the end result polarizes opinions like this particular example.

Executed by Delhi-based Smoke’em Customs, this mod job will not go unnoticed on the road. For starters, the yellow paint job screams for attention and there is a lot going on at the front end. The car gets an audacious bumper, Transformer-inspired grille, smoked headlamps and a monstrous black hood. The changes are so extensive that the original identity of the car is hardly recognizable.

The profile also has nothing subtle about it. The flared wheel arches, fender vents, black side skirts, and dual-tone red-black render a whole new character to the other understated Ciaz. The rear sports a massive black diffuser with twin exhaust pipes, blacked out combination lights and an accentuated boot-lid spoiler. Body kit is accompanied by an assortment of random stickers.

Photos of the interior are not available but we suspect the modified Ciaz to have new seat covers at the very least. Details of the mechanical changes are also not clear but the video points towards free-flow exhaust and performance air-filter. It has to be said that the customized Ciaz has an impressive exhaust note (strongly suggests that this is a petrol version).

The modifications are too extensive for us to ascertain if this is a pre-facelift model or the updated one. The facelifted model is powered by the new 1.5-liter K15 Smart Hybrid petrol motor which produces 104 hp and 138 Nm of torque in its stock condition. This motor can be had either with a 5-speed manual or a 4-speed automatic transmission. The old version was powered by a 1.4-liter petrol motor which is good for 92 PS and 130 Nm of torque.

Going by the extent of the modification job, it is surprising to know that the cost of same is just Rs 1.8 lakhs, reveals Sahil Kumar from Smoke’em Customs. With RTOs across the country getting stringent about the type of after market modifications allowed on two and four wheelers, the customization industry in the country is facing uncertainty.