Maruti Ertiga and XL6 compared on video – Which MPV to buy? 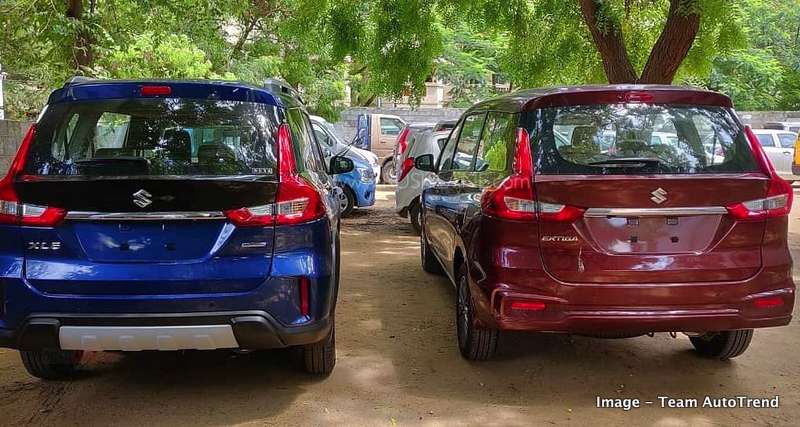 With the new Maruti XL6 based on the Ertiga, there is bound to be comparison between the two. The XL6, as its name suggests is a 6 seater vehicle unlike the Ertiga which is a 7 seater. However, this is the basic difference and the other changes extend to its exterior and interior makeup along with its engine lineup. The Maruti Suzuki Ertiga is sold via the company’s Arena dealerships while the XL6 gets sold via the NEXA outlets .

The premium iteration of the Ertiga called the XL6 is seen in the video parked next to the white coloured Maruti Suzuki Ertiga. The exteriors show off a range of differences starting at the front with the XL6 getting a squared off bonnet, all LED headlamps, a beefier front grille with less use of chrome.

The Ertiga is seen with projector headlamps, a chrome front grille and a bumper and bonnet designed differently as compared to that seen on the XL6. On the sides, through door handles sport the same design, the wheels are starkly different. They are in a gun metal grey colour on the Ertiga and in black alloy on the XL6 though both measure the same at 185/60 R15. It may be noted that on the XL6, the beefy cladding and large and bulkier wheel arches somehow do not match the wheel setup which makes it look out of proportion. Watch the detailed comparison video by AutoTrend channel on YouTube below.

Changes to the rear include a different tail lamp setup on the Maruti Suzuki XL6 though wiper, washer, chrome bar and logo designs remain the same. The boot lid design is also identical. The regular Ertiga gets a partly lit up parking lamp and normal fog lamps. The Maruti Suzuki XL6 also gets roof rails and cladding which is not seen on the Ertiga.

Interiors of the XL6 sport an all black colour scheme as against the beige and grey colour scheme seen on the Maruti Suzuki Ertiga. Other than the colour difference, the key difference lies in its seating setup. The XL6 gets captain seats with arm rests in the second row unlike the bench seat seen on the Ertiga making the XL6 essentially a 6 seater model as against the 7 seater Ertiga. The XL6 gets cruise control as standard which is offered on both the Zeta and Alpha variants of the XL6, while features include leather wrapped steering wheel and seating. The door pads are also given a premium stance but are not cushioned and should hollow and hard on touch.

The XL6 and Ertiga share common controls which have not been improved in any way on the XL6. However, there is a sliding arm rest on the XL6 but interior storage capacity is less. It also gets a standard handbrake while the smart key is different from that seen on the Ertiga in a smaller and more easy to use design.

Where performance is concerned, the XL6 gets low gear mode on the automatic variant allowing for hold onto 2nd gear offering more torque for quicker overtaking. This is not seen on the regular Ertiga which offers petrol, diesel and CNG engine options.

Both the Ertiga and XL6 get their power via the same BS VI compliant 1.5 liter petrol engine offering 105 PS power and 138 Nm torque mated to 5 speed manual and 4 speed torque converter automatic. The top spec Ertiga is not offered with an automatic while both variants of the XL6 get this option. The Ertiga also gets a 1.5 liter 4 cylinder turbocharged diesel engine which makes 94 bhp power and 225 Nm torque which is not offered in the XL6. The Ertiga also gets a CNG option for the 1.5 liter K-Series petrol engine.