Maruti Suzuki India Limited, leading automakers in the country have revealed sales results for February 2019. During the past month, the company had offered several discount schemes on its range of passenger vehicles. In spite of that, sales have not been as expected and the company posted flat sales growth for 8th consecutive month. 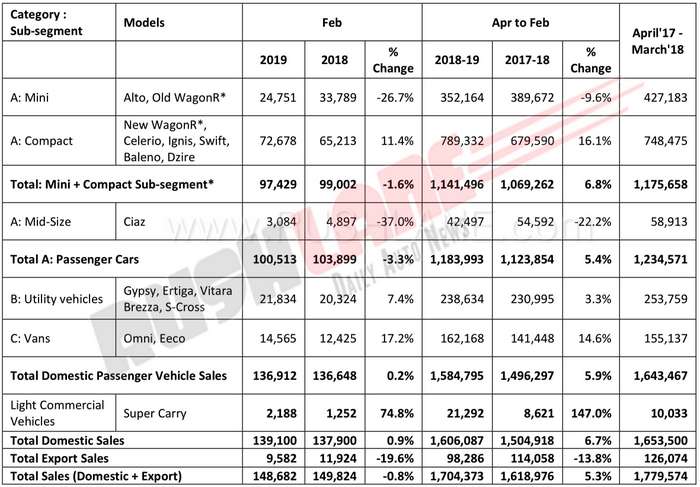 In the table, you can see that Maruti has upgraded the segment of New WagonR. Old WagonR is slotted in the Mini segment, while new WagonR is slotted in the Compact segment, along with Celerio, Ignis, Swift, Baleno, Dzire. Thanks to this, the Compact segment registered sales of 72,678 units, as against 65,213 units sold in Feb 2018, thereby growing 11.4%

Launch of new cars like Ciaz facelift, new gen Ertiga, new gen WagonR, Baleno facelift, 2019 Ignis, has not given the expected push to overall sales. Ever since July 2018, the company has been posting flat sales growth. For the period of July 2018 to Feb 2019, Maruti sold 11.27 lakh cars in domestic market, as compared to 11.3 lakh cars sold in same period of previous year; thus registering a marginal decline YoY.