It is not uncommon for automakers to file several trademark applications to protect their prospective new car nameplates. Just last week, news about three new Maruti trademarks – Libertas, Espaco and Solido – came out. The automaker seems to be on a spree as three more trademark filings have emerged online now.

Maruti Invicto, Plazeria and Excursio are the latest names that were trademarked by the OEM. While the names alone don’t mean there will be corresponding products lined up, they make for interesting speculations. Usually, OEMs explore different nameplates for a single product and eventually arrive at a final choice after several rounds of shortlisting processes which sometimes include customer survey as well.

The name Invicto sounds like something that would suit an SUV while Excursio has a MUV vibe. Associating Plazeria to a body style is tricky but we think it could be adopted by a small car or a sedan. Or these could be variant names of their future electric cars. It is also very possible that none of these brand names will graduate to being commercial nameplates. 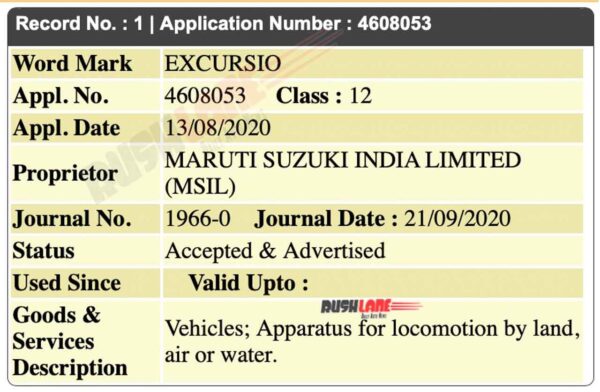 Or, these names could simply be some kind of new dealership experience. For example, the name Nexa was also registered in a similar filing. And we know that Nexa was not used to name a car by Maruti, but to launch an entirely new dealership network. Similarly, it is too early to say for sure if these new names could be used for naming new cars, or something else from Maruti Suzuki.

Maruti Suzuki is currently working on a range of new products most of which will likely retain the existing nameplates. For example, the heavily updated Alto and the next generation Celerio which are currently under advanced stages of testing are not likely to adopt new branding. The Maruti Wagon R EV is not expected to be rebranded either since the existing moniker enjoys one of the strongest brand recall in the small car segment. 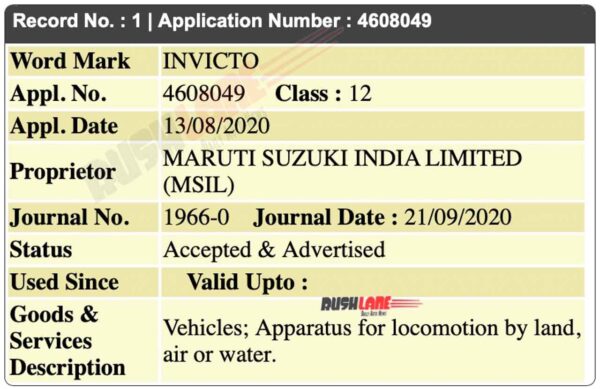 However, few of the newly registered trademarks could be used for variant extensions. Moreover, going by Maruti’s history of numerous special edition variants, we won’t be surprised if these trademarks are used for upcoming editions.

With festive season inching closer, Maruti Suzuki is gearing up to cater to the increased demand. The Indian automobile market is showing signs of recovery post lockdown as dealers are reporting strong re-start to the business. The collective hope is, the increased preference for private transport would help the market recover not just to pre-pandmic levels but also post positive YoY growth. 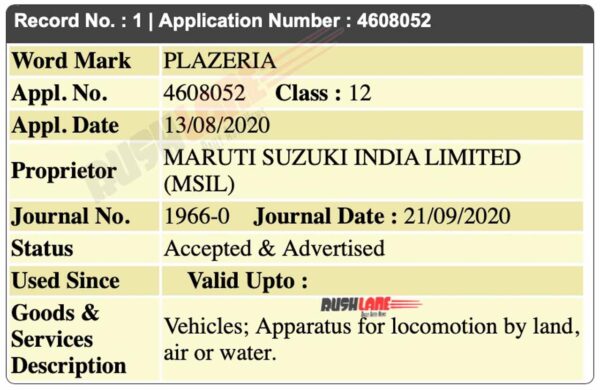 The company which has ditched diesel engine altogether has floated a marketing campaign to promote its petrol-only by encouraging the prospective customers to calculate the cost-benefit balance between petrol and diesel engines based on their usage patterns.