At the last Auto Expo held earlier this year in February, many manufacturers showcased concepts of their older generation models as future electric cars. The most prominent of all was seen in Tata Motors’ pavilion in the form of Sierra EV based on Tata Sierra which was a popular SUV back in the 1990s.

It generated quite a bit of buzz and trended on the internet as well. Similar to that in recent months, more than one case of Maruti 800 has been digitally rendered as an electric vehicle, some of them even nailing the micro hatchback’s design. In a similar instance, a designer has rendered the image of the next-gen Maruti Omni as an EV.

Maruti Omni, although discontinued, continues to be part of many livelihoods, especially those who carry out small businesses. It has also been actively used as a ferrying machine to drop children to and from their homes and schools.

Even though it has been infamously described as a kidnapping machine, thanks to multiple bollywood movies using the car for kidnapping scenes! But truth be told, it was a perfect utility van for people on a strict budget. Although it had its fair share of drawbacks it was surely one piece of a reliable machine.

Automobile design student, Shashank Shekhar (@shekhar_design01) has reimagined a new generation Omni with an electric powertrain. Like the IC engine-powered model, this rendered Omni also adopts a boxy design. However, here it features a semi-bonnet package, as opposed to the discontinued model’s cab-over format. In real-world, this could lead to slightly better performance due to improved aerodynamic design. Overall, this would lead to enhanced safety as well.

At the front end, it gets similar rectangular headlamps with C-shaped and straight-line LED inserts that are smoked. This makes it look very premium and futuristic. The bonnet and front bumper have a clean contour with uninterrupted surfacing giving a very low profile look. 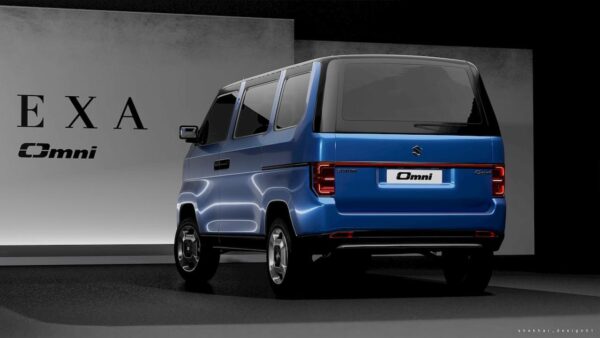 Further down, it is laced with horizontal LED fog lamps. On sides, it features squarish wheel arches, alloy wheels along chunky wing mirrors. The black underbody claddings and a high ground clearance give it a more rugged look.

Door handles of the conventional front door and sliding rear doors are placed together and form a single unit. It also gets a side turn indicator on its B-pillar which complements the ones integrated on the side ORVMs.

The rear of Omni EV gets familiar combination lamps but with LED light guides and are connected by a full-width LED stripe on its tailgate. From this profile, Omni appears to be wider. It also gets additional goodies such as rear wipers, defoggers and fog lamps. It is also offered in a dual-tone colour scheme.