RUSHLANEDAILY AUTO NEWS
HomeCar NewsMaruti Gets Onboard The Twitter Game - Replies To Tata's Dig On...

Looks like the social media arm of Indian auto manufacturers are slowly lightening up. Who knows, this festive season maybe someone gifted them a lamp. Whatever has encouraged the change of stance, it’s a much better take than before.

Online chatter though long dissed has stood its ground and now everyone has something to say. In recent days, MSIL has drawn flak for its latest GNCAP safety rating, but that’s a separate story to be detailed. The gist – Maruti Suzuki India Limited (MSIL) found itself at the receiving end cause of its 0 star safety rating for Maruti S-Presso, an entry level small car.

Tata Motors took the opportunity to take a dig by depicting a broken mug of coffee. You get the reference. MSIL must have had a good think and have turned to social media to claim some, and more. With Twitter filters on unverified claims being a reality, MSIL has used the template to boost some life into an otherwise dull twitter account. Side note – They are not the only auto manufacturer account to be spewing boring updates.

MSIL’s attempt at fun effort – We are India’s favourite automobile brand followed by a pretend template that reads as – This claim is undisputed, unlike regular official Twitter filters that read as, this claim is disputed. 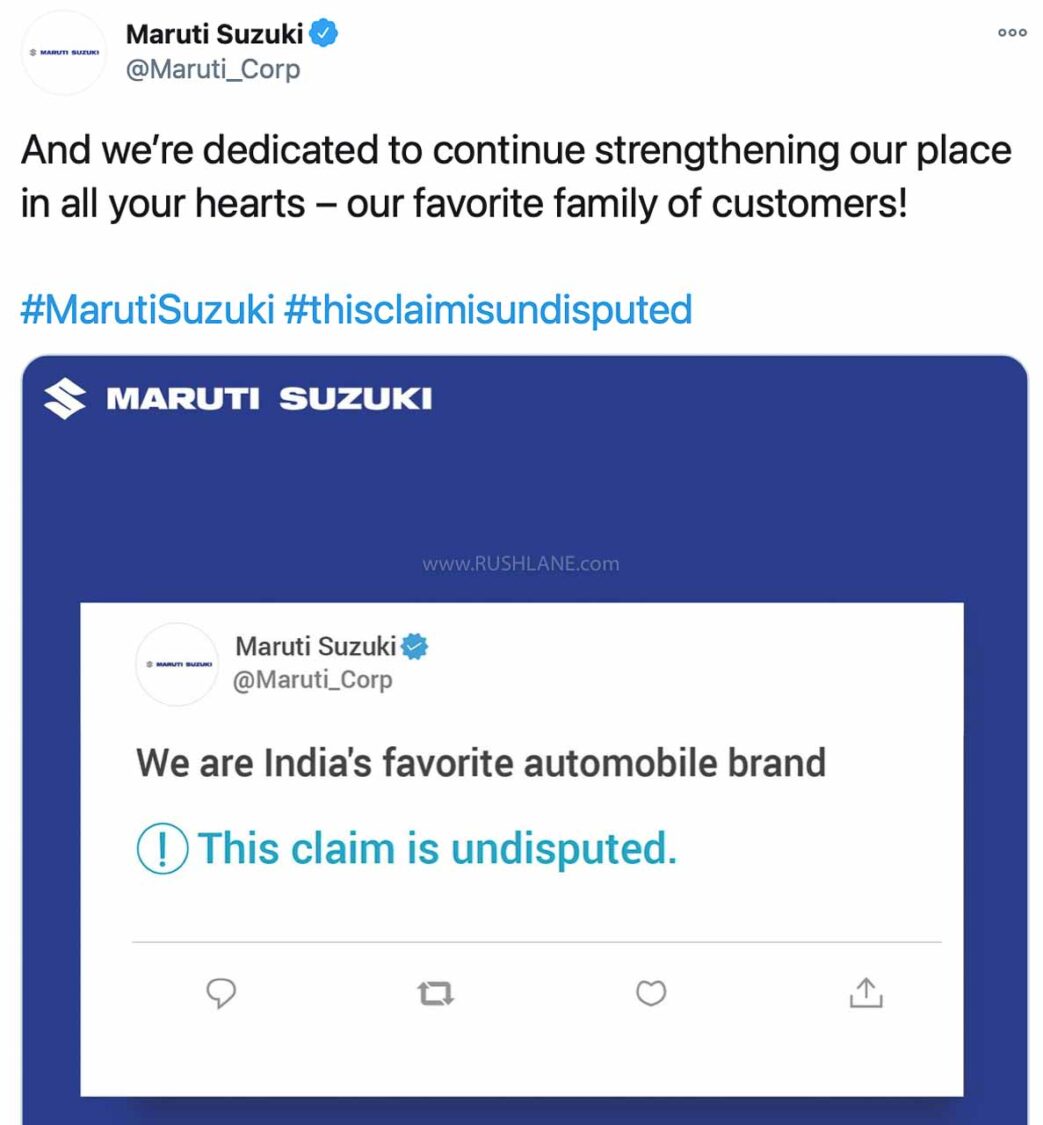 Affordable, yes. Great reach into the length and breadth of the country, yes. Prompt parts and service availability, yes. Great range of CNG cars, yes. So, yup there are plenty of reasons that work in Maruti’s favour when potential customers are out searching for a car, especially if its an entry level car, but whether or not these reasons constitute the realm of favourite is clearly up for debate. A claim to being India’s most sold automotive brand would truly be undisputed.

When it comes to selling cars, none compare to MSIL. The brand has just posted its highest ever monthly sales in Oct 2020 of over 1.63 lakh cars sold. Maruti has an almost 50% market share in passenger car market. They have sold 2 lakh units just via online since April 2019. There are manufacturers (including Tata), that haven’t sold that many cars in the same period through their brick and mortar stores.

While car safety is a serious consideration, and huge strides are made daily to ensure this always stays a primary focus area, it clearly isn’t the only consideration when buying cars in India. MSIL was selling cars here by dozens when dialogues and discussions around safety were nil. And they continue to do so, everyday.

It was the year 2014, when Global NCAP revealed that Maruti Alto had scored a 0 star safety rating. Over the years, multiple Maruti cars have been tested, even more of them have received 0 stars. But that is probably having 0 effect on sales of Maruti. In fact, Maruti car sales continue to grow even higher with each passing year.

Getting on the lighter side of things, it’s all in good jest unless the next manufacturer comes up with a great comeback. Would be heartening to see them folks get on with the task at hand instead of the occasional smart Alec having a say.