Maruti Suzuki launched the tallboy hatch S-Presso last year and despite mixed responses at first glance, the car has been doing decent numbers when it comes to sales. Maruti has managed to get this one right as it has found the liking of the general masses. Maruti Suzuki offers the S-Presso at a starting price of Rs 3.70 lakh which goes up to Rs 5.13 lakh for the top-spec AMT trim. (Both prices are ex-showroom).

While it surely is compact in size, the S-Presso manages to offer a decent amount of room inside the cabin. Its tall up-right stance, high ground clearance and beefy exterior make it look SUV-ish which is why Maruti calls it a ‘Micro SUV’.

Add faux skid plates on both front and rear bumpers and the side door cladding from the optional accessories package and the SUV look gets accentuated. Although essentially it is still a small car, which is sold in the same segment as the Maruti Alto.

One of the down points of S-Presso has been its looks which despite having so many SUV-like elements look outdated. In an attempt to bring the best out of both worlds, the overall look seems very unsynchronised. However, a customised S-Presso at the dealership level might change your thoughts about its looks.

Apart from the updates mentioned above, everything remains the same. The interiors, barring the red inserts, are identical to the stock car. The S-Presso is powered by a 1.0-litre K-series 3-cylinder petrol engine that produces 67 bhp and 90 Nm of peak torque. 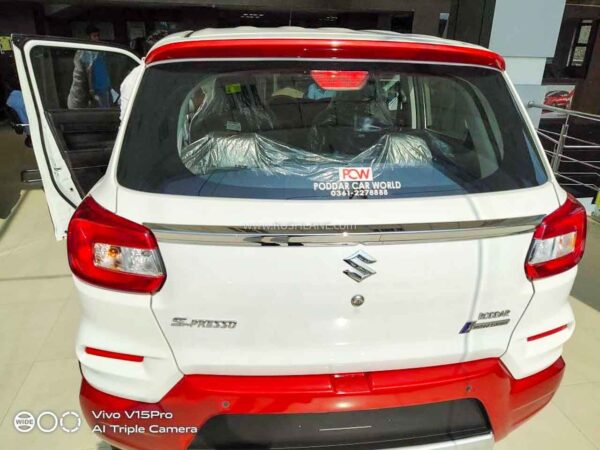 Dubbed as ‘Limited Edition’ the S-Presso in the image above is every bit the regular hatchback but looks much bolder. Maruti Suzuki offers a host of customisation packs with the S-Presso and this dealership has been able to choose the best fits out of the options present. Draped in red, the car has been laced with faux skid plates on both ends and door cladding on both sides as expected. It gets a dual-tone treatment with a completely blacked out roof which is more evident from the sides.

The ORVMs are also blacked out and it gets a silver insert on the side claddings. It receives dual-tone diamond-cut alloy wheels of the same 14-inch size. Other notable additions include a black garnish on the rear reflector panel and a blacked-out spoiler. The chrome strip on the boot door running between the taillights gives it a premium touch. The interiors too, get the red accents on the door panels which give it a funky look.