Following months of slowdown, Maruti has been able to jump to green in October 2019. Domestic sales are up 2.5 percent, upto 1,41,550 units from 1,38,100 units. This following a grand showing on Dhanteras when the company announced 45k units delivered in 1 day.

While the day’s performance is phenomenal, it has little or no bearing to overall performance since people ask for delivery on the day as it’s considered to be auspicious. But compared to sales registered in the last 7 months, this is a huge relief for the company. 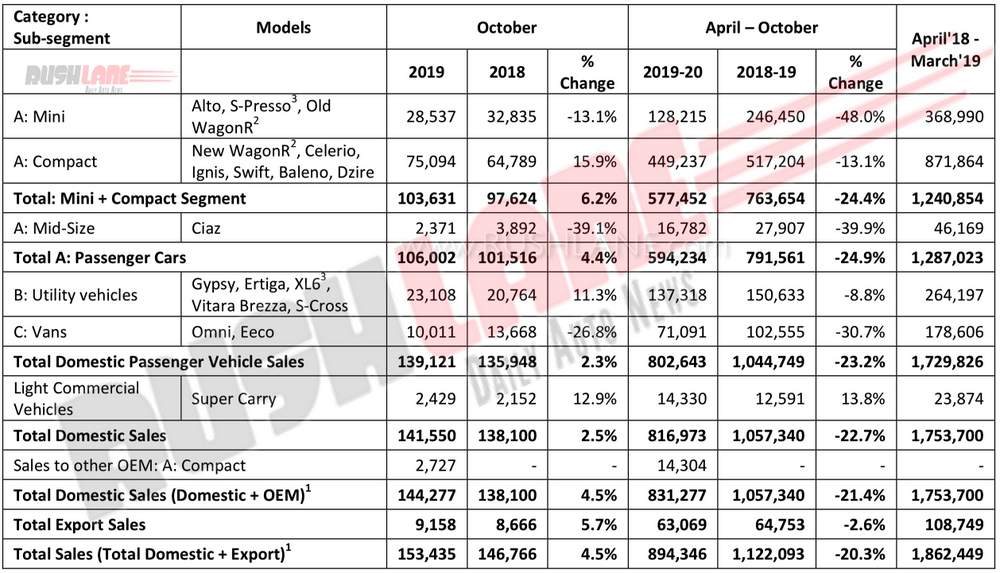 The mini car segment, which includes Alto, S-Presso and Old WagonR, the company continued to register decline in sales. This was in spite of the newly launched S-Presso small SUV. Sales in this segment for Oct 2019 stood at 28,537 units as against 32,835 units sold in the same period last year.

In the UV segment of Maruti Suzuki, which has Gypsy, Ertiga, XL6, Vitara Brezza, S-Cross – the company registered sales growth of 11.3%. Total sales by this segment were at 23,108 units in Oct 2019.

MSIL considers the sales of its cars to Toyota separately as ‘Sales to other OEM. That accounts for another 2,727 units of Glanza added to its total domestic sales. This takes the numbers upto 1,44,277 units, up from 1,38,100 units. Last year this time the arrangement with Toyota had been inked but rebadged cars were still not on sale.