Recalling vehicles to replace a defective component is not a new thing in the automotive industry. The onus is on OEMs to ensure that the vehicles manufactured by them do not have any potential flaws that endanger the occupants and fellow road users.

While on most occasions car makers openly announce a recall campaign explaining the details of the flaw and potential outcome, there are instances where the exercise is masked as a service camp or executed without publicity on a case-by-case basis.

We have come across a internal document as well a few customer testimonials on social media indicating that Maruti Suzuki has issued a notification to its service centers, advising them to replace steering columns of multiple models belonging to suspected batches. The document which appears to be a circular to the authorized dealerships details the list of models and respective VIN and Chassis No. ranges of suspected units. 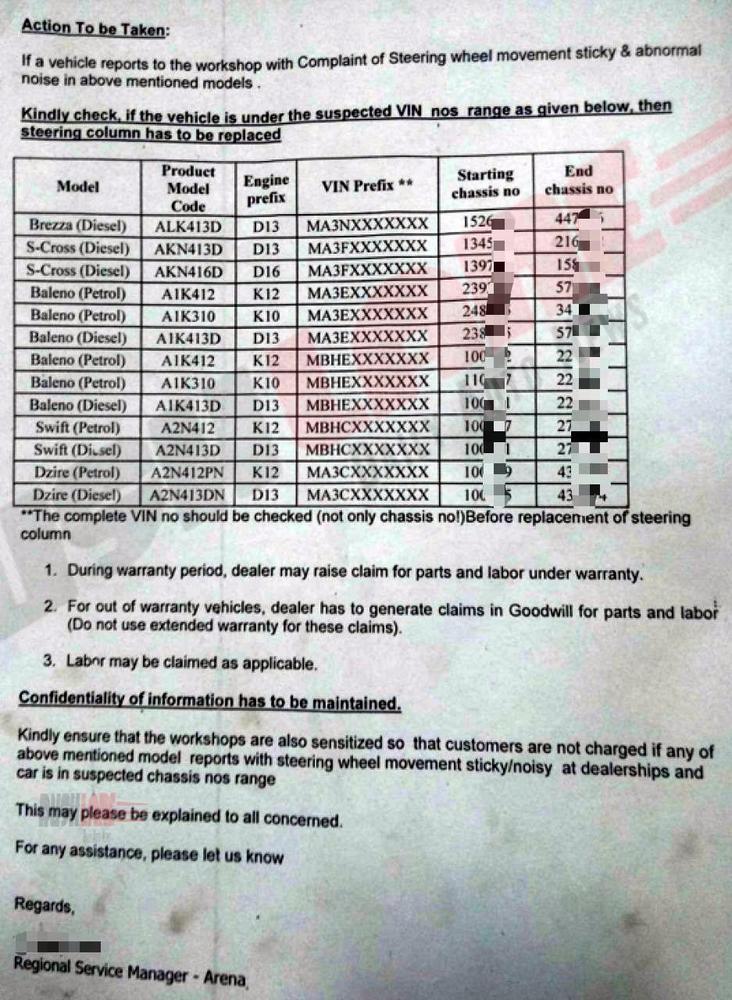 The document also says that the service centers should replace the steering column at no cost to the customer in case a vehicle belonging to the suspected batch arrives with a complaint of abnormal noise or sticky movement of the steering system. Interestingly, the notification also advises the dealerships to maintain confidentiality about this replacement exercise.

It looks like Maruti’s decision to replace the steering column free of charge comes after a series of complaints by customers. The specification of ranges of chassis numbers of affected vehicles indicate that Maruti’s investigation has identified the root cause.

A sticky steering column has a direct influence on a vehicle’s maneuverability and stability. While Maruti’s effort to replace a faulty component for free should be appreciated, it is also to be noted that such a flaw with potential safety implications should have initiated a full fledged recall campaign. Why wait till vehicles belonging to the suspected batches to develop a snag? Isn’t prevention better than cure?